Why is equality for people with disabilities not realized? 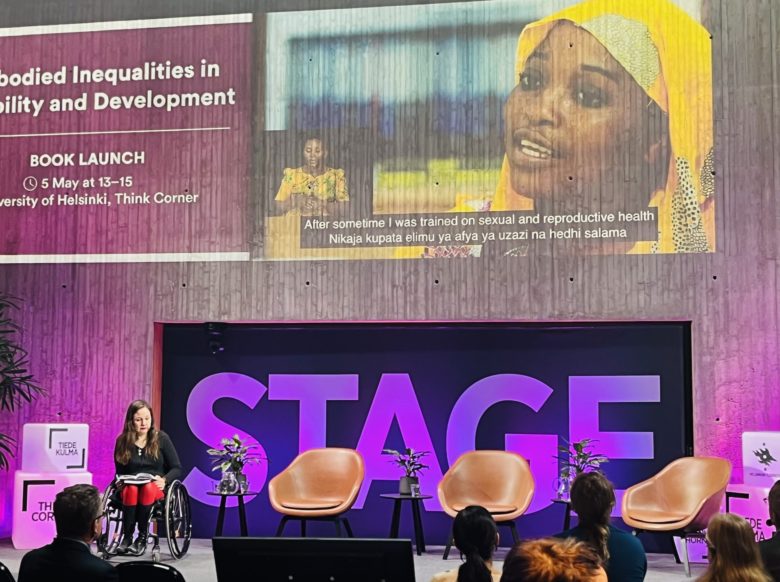 Thérèse Mabulayi Kamalebo, who lives in the Democratic Republic of Congo, uses a wheelchair. Thérèse is an example of a woman who is twice as vulnerable in terms of global warming and climate change.

Vulnerability is caused particularly by financial dependency, often coupled with reduced mobility, or visual or hearing impairment. Moreover, many of them do not recognise their rights, as they have to focus on coping with their everyday challenges.

Thérèse would like to see women involved in the change, from defining strategy to implementation to evaluation. She wants people with disabilities to be fully involved, and not just beneficiaries. Her situation is an example of challenges that require a holistic approach to identifying them.

Embodied Inequalities in Disability and Development, edited by Hisayo Katsui and Virpi Mesiaislehto, presents five examples of how inequality among persons with disabilities occur. In addition to Fida, the publication of the scientific work has included the Finnish Mission Society, the Abilis Foundation, the Finnish Ministry for Foreign Affairs and the University of Helsinki.

The book’s launch brought researchers, decision-makers and activists together to have discussions in University of Helsinki’s think corner. The book’s significance featured strong both in the speeches of the Ministry for Foreign affairs climate and disability ambassadors, and in the planning of UN’s disability work.

In Fida, an inclination to take into account the diversity and individuality of persons with disabilities has been especially noted. People with disabilities have also experienced multiple discrimination, based on gender, age, and ethnicity. A person’s entireness is often overlooked.

Aiming for 500 new churches in Ethiopia

Abdul can go to school by himself now

Maiju from Kuopio did her social work practicum in Bangladesh: “Mental health is still taboo in the country”