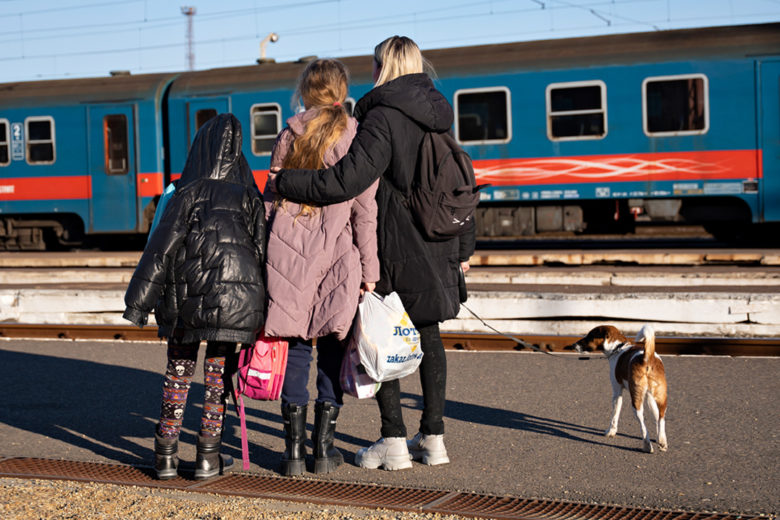 The sleepy small town of Zahóny on the Hungarian-Ukrainian border was turned into a teeming junction station in an instant. One of those heading for a new life is Elena, who fled Kiev.

One train after another arrives at Zahóny station. Seventeen days after the war began, a blonde woman emerges from the train with her two daughters. Both girls have backpacks. You can see the fatigue on the mother’s face, from the long journey, and the weight of worry heavy on her shoulders.

The passengers disembark slowly, and the station fills up with delay, since every passenger is inspected individually. Aid workers cross the tracks to welcome them: they help carry luggage and give them water bottles. A newly arrived family moves out from the station to look for food.

– When the war began, my husband and I decided that I had to leave for the sake of the children. We didn’t want the girls to have to endure the sound of sirens or hide in bomb shelters. I wanted to take the kids to the safety. My husband stayed in Kiev to defend the city, while I went to the mountains in western Ukraine with the girls, Elena says.

After making the decision, the family had travelled non-stop for 24 hours to reach safety.

– We first stayed in a ski resort in the west. It was not very expensive. There was a lot of snow and our dog loved it!

Elena sits with her 12-year-old daughter Tanya in a tent in front of the station eating pasta. Tanya speaks a little English and say that she’s fine. The kindness and good reception of the Hungarians surprised them. Nine-year-old Mary has already eaten and restlessly explores around in the tent.

– When we heard about an air strike near our home, we decided to get away and try cross the border.

At Chopin station in Ukraine, the family had to wait several hours before they could catch a train to cross the border. They’re still on the road. Soon they’ll have to board the train to Budapest. The journey from the border to Budapest and then to other cities or airports is free for refugees. Elena gives some food to the family’s little dog and then gets up with the girls to collect a large green canvas bag. The bag is amid the crowds in the train station.

– My own story is not as tragic as that of some others. I have a close friend in Mariupol. For a long time, I tried to convince her that we need to get out of there right away. She wouldn’t do it and stayed in Mariupol. We haven’t been able to contact her for days, Elena says with emotion.

I really hope we have a home to go back to.

Fears about the fate of friends, spouses, and other loved ones are daily on her mind. Elena’s own parents passed away during last year.

– I already have two tragedies behind me, but that may be for the good. My father was sick and wouldn’t have withstood this, so we would have had to stay in Kiev. I couldn’t have brought the girls to safety, Elena explains.

Elena says many older people refuse to leave and believes that her parents would have done the same. Elena’s thinks about home all the time. She gets news about her hometown by messaging with her neighbors.

I really hope we have a home to go back to. But I’ve seen and heard how bombs destroy, Elena sighs.

The uprooted family stands on the Zahóny train station platform. Mary is shy and squeezes a stuffed animal against her chest. That was the first thing she packed. Tanya dreams of studying at the Vienna Conservatory. The girls have a long way to go.

Elena has made a friend over the Internet who will meet them at Budapest station.

– I am so grateful and surprised by people’s kindness, although I would certainly have done the same, Elena smiles.

Restless movement begins to stir at the station. The train doors open and once allowed, a mass of people moves like a wave towards the train. Volunteers help with larger pieces of luggage, and all together everything is got on the train. Elena turns at the door to say good-bye. Mary and Tanya’s voices can be heard inside. A little later, the train whistles and begins its journey towards Budapest, carrying many heartbreaking stories that hopefully will end happily.

By donating, you can help people both in Ukraine and those who, like Elena, have fled outside of the country’s borders.