“We don’t have any socks – would you have any?” 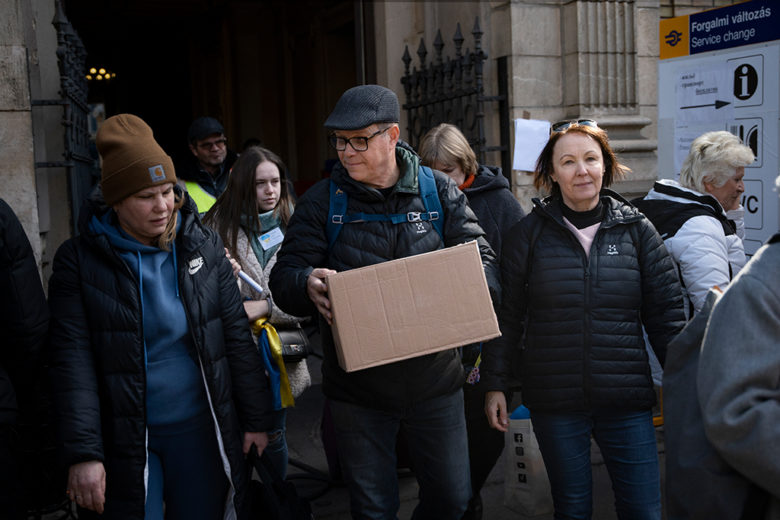 When Harri Kröger and Anita Pylvänäinen Kröger received a donation of 3,000 pairs of bamboo socks, they didn’t know that they would fill the everyday need of people fleeing from Ukraine.

Fida’s missionaries Anita and Harri, who live and work in the Hungarian capital of Budapest, have been at a railway station for the past two weeks meeting people fleeing the war in Ukraine. The refugees get off the train looking for a safe place to stay since they’ve lost their homes.

– Just this morning we talked with a mother of two teenage children. She told us how their home and town had been reduced to rubble. She even saw her own home was destroyed, says Harri Kröger.

The family’s father stayed to defend his homeland when the mother and children fled. These stories are painful.

– You can see from these people that they are trying to hold it together. But they have move on to survive, says Anita.

Another family that Harri Kröger talked to, was a mother from Kiev with her two sons. They had first taken the train to the border and then switched to another one. Their goal was to reach Berlin. The Krögers say most of the people are children with mothers and grandmothers at the train station.

– Some are from the peaceful countryside, where the war has not yet been clearly visible. Others come directly from Kiev, where the streets are being blown up, Harri explains.

Harri and Anita work in Budapest among Messianic Jews. Last Friday, they attended sabbath eve at a local synagogue together with friends. The synagogue was full. About 30-40 Ukrainians had come to the meeting. Towards the end of the evening, the Kröger’s met a young family with three children, who had fled Kiev.

– Their wish, like many others, is to return home. But for now, the family will stay in Budapest, at least for the time being, Harri explains.

Anita adds that they plan to help this family a little. The meeting is scheduled for the next day.

– It’s hard to watch all this, even though we trust God in the middle of it all, Anita says.

People’s distress and grief make you feel helpless. According to Anita, it’s easy to feel like there’s so very little you can do. Sometimes however, a pair of socks can mean a lot.

– I received a call from the church that is giving aid at this train station. They had everything, except socks. The caller knew we had some. He asked if we could bring them over, Harri says, holding a pink carry-on with a box full of socks in it.

Harri and Anita weave among the people into the lobby of the station. The socks that they received as a donation from ProBambu, are moving ahead. On the side of the carton, it reads “socks” in Finnish. Harri notices this when he hands over the box to the aid worker through the door. In there, they end up warming toes. Toes whose owners need a lot of warmth, especially now. 3,000 pairs of socks alone won’t be enough, but it’s a great start.