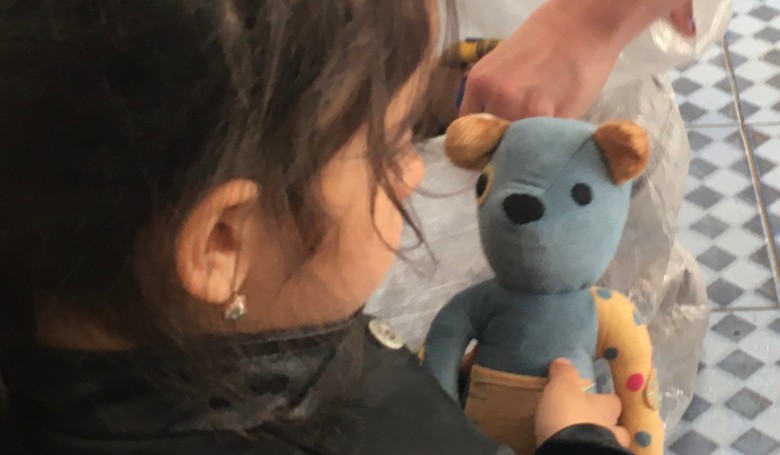 Reach Global, with whom Fida has partnered and collaborated with in Eastern Europe before, donated a large case of about 120 trauma teddy bears to Fida. The donor’s wish was that the teddy bears would be distributed specifically to refugee children from Ukraine.

– The first batch, about half of the teddy bears, were handed out in Grimancaut, Moldova. The local Roma church has arranged emergency accommodation and assistance for refugees there. Most of these refugees have come from Odessa. With Fida’s help, the church has been able to provide food security for the refugees, says Anne Harjukoski, a Fida employee who recently returned from Moldova after training church volunteers in giving psychosocial support.

I hope that the children will get even a little comfort from the bears.

The bears are designed to be unique. Each teddy bear is made of cuddly, comfortable and different-feel fabrics. The bears are made in pairs. One ear of each paired teddy bear is of the same fabric. It’s easy to hold the teddy’s paws tightly and they’re nice to hug. There’s a pocket on each teddy bear’s stomach where you can hide treasures. There is also a special poem in the pocket and a card that could also be used in trauma therapy.

– I gave out 53 of the teddy bears to children. Of course, they were thrilled to get their hands on the bears. I asked them to think about a name for their bear and told them that they could tell the name to others if they wanted to, explains Anne Harjukoski.

The children were told that the teddy bears can help children in different situations around the world.

– The children really listened and held the bears tightly when our time together ended. I hope that the children will get even a little comfort from the bears. They’ve been through so much. Both parents of a 6-year-old girl had just died in the war, Anne Harjukoski explains.

It is precisely for this reason that Fida’s humanitarian aid includes not only food, drink and shelter, but also psychosocial support. Trauma teddy bears are one part of the support offered to children.

– The significance of psychosocial support is important for people living in difficult conditions and situations. For some it means more, and for others less, but it always means something, Anne Harjukoski emphasises.

The ways to help are different and depend on each person in need. Anne Harjukoski noticed that even adults wanted to take part in the children’s programme. The parents wanted to draw and join in the time when they learned to breathe calmly with the children.

– One of the parents told me that she has never known how to calm herself down in such a simple way as focusing on breathing. It’s a moment when you can do and think about something other than war. Art and music are also therapeutic and used as tools for therapy. They can be used to unburden one’s own feelings and lighten one’s own mind, Anne Harjukoski clarifies.

A little boy had drawn a plane and a house – a warplane that has become all too familiar to these children. It can be difficult for children to put their experiences into words, so drawing, singing, trauma teddy bears, and other methods can be a channel to express their emotions and thoughts. Any kind of creative activity can help children vent their emotions.

– Were there some special meetings? It was such an exceptional afternoon overall! I’m sure they’ve all gone through tough times, but the program and teddy bear really brought them joy, Harjukoski says.

In the evening I saw the girl again and she still clutched the bear tight under her arm. I figured that surely that bear brought her some security.

– One girl was particularly memorable. I don’t know her name, but I observed her from time to time. The girl, about eight years old, was very apprehensive and made no eye contact. She sat apart from the others, didn’t answer my question, and didn’t raise her eyes. She just squeezed the bear tightly in her arms. In the evening I saw the girl again and she still clutched the bear tight under her arm. I figured that surely that bear brought her some security.

– I hope that this bear will remind the girl for a long time that Jesus can also be spoken to in any situation.

The rest of the bears are still waiting for the right moment to be given to those who need them. Anne Harjukoski says that there are a lot of refugee children from Ukraine in Eastern Europe, so every teddy bear will surely find a home.