The war separated 9-year-old Tanya from her family 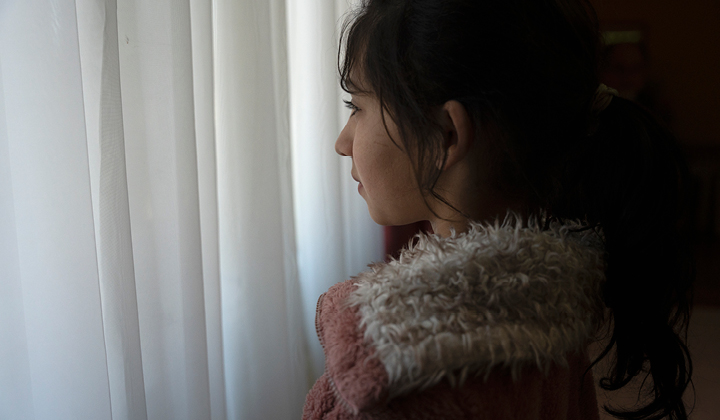 Because of the war in Ukraine, children had to leave their homes as they fled to safety. Everything familiar was left behind. Cousins Tanya and Lolita, who fled Ukraine, have been separated from their family members.

A high fence surrounds the light green house. The white window frames give it a fresh look. A small kitchen and two rooms open behind a glass door. The cheerful sounds of children and adults create a comfy mood. A pot of water boils on the stove.

Both rooms have thick mattresses on the floor. There’s a big pile of mattresses next to the wall. 12 people are staying here now. There were 24 just a while ago. The blankets are arranged neatly with a few stuffed toys on the pillows. There’s a red winter coat hanging on the corner coat rack. There’s a TV on a lace tablecloth on the table and a few toys.

My brother and father stayed in Ukraine.

The brown-eyed cousins, Tanya and Lolita, sit with their colouring books on the floor of the emergency shelter organized by Fida’s partner organisation, the Hungarian

Roma Mission. They came from Ukraine 10 days ago. Their grandmother and Lolita’s mother are with them. The grandmother sits on a thick mattress and smiles at the girls chatting.

– In Ukraine, we lived in a small house. It was the size of this room. There was also a small house in the yard for the grandparents. The roof of the house was red, 9-year-old Tanya explains.

Lolita’s home was a little bigger. Grandma lived in a small house in their yard. The living room had pink walls and red furniture.

– Our kitchen looks like this one here, explains Lolita, who is a few years older than her cousin.

Both girls chat happily. Tanya’s favorite food is cabbage rolls. Lolita, on the other hand, loves mayonnaise. They haven’t been to school because of the pandemic, but before that, that was also part of their daily routine. Knitting is also fun! Fida employee, Kirsi Hekkala, who works with Roma communities in the Uzhorod region of Ukraine, has taught Lolita how to knit. Tanya learned how to knit from Lolita.

Away from their loved ones

Tanya and Lolita say they were forced to leave home because they were running out of food. The girls and their families crossed the border into Hungary by train. The border guards didn’t believe Lolita’s brother was only 13 years old. Lolita’s brother had his documents, although the Roma may not always have all the official papers. It wasn’t enough to convince the border guards.

– My brother had to stay in Ukraine with my father, Lolita says.

Lolita misses her brother because it’s the first time they’ve been apart from each other. Tanya misses her family, too. Tanya’s mother couldn’t bear the fact that her husband would be alone without food in Ukraine and returned there with Tanya’s little brothers. Tanya stayed with her grandmother in Hungary.

Tanya now sits on the mattress and yawns widely.

He told them not to return home, where they would only die of hunger.

The girls live in a Roma neighbourhood in Ukraine that is isolated from the rest of society. It’s difficult to get food. That’s why mom moved Tanya and her grandmother to safety in Hungary. The girls’ uncle told them not to return to Ukraine.

– He told them they would only die of hunger if they stayed, says Lolita’s mother.

Hope for the future

But this morning, there’s been good news. It looks like Lolita’s brother will get across the border. A cheerful and hopeful smile emerges on Lolita’s face. When asked about the future, the girls become even more talkative than before.

– I want to be a hairdresser, says Lolita.

– I want to make beautiful nails, explains Tanya, and gets excited talking about constructing nails.

Neither of the girls likes long nails. They’re not convenient. But colorful nails with glitter are just fine.

Leaving your home and moving to a foreign country are big things for a child. In this case, it’s important to create the safest possible environment for a child. Ordinary everyday things, such as dreaming of glittery nails and eating favorite foods, help children during sudden changes in daily life.

As the war drags on, so does the humanitarian crisis. Children are particularly affected by this. Children should be allowed to play, laugh, and live safely. It’s their right. By donating, you are helping Ukrainians, in the midst of a humanitarian crises, to get food, drink and shelter, as well as the opportunity to deal with traumatic experiences.