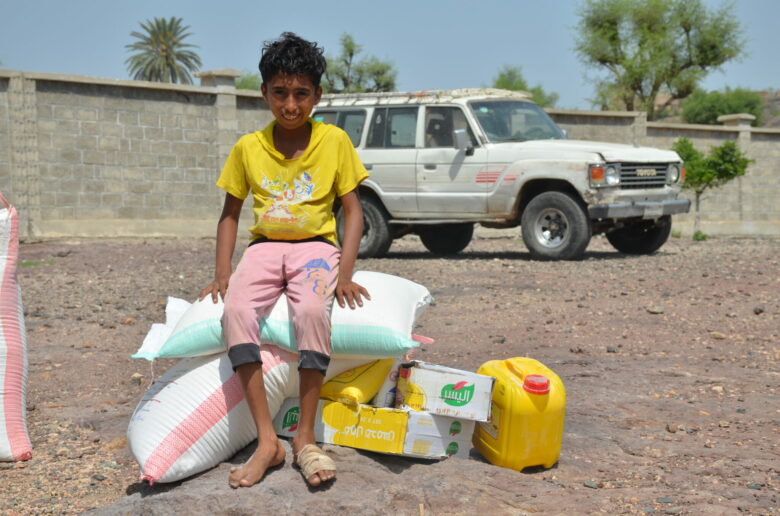 Right now, in the global fight against hunger, hunger is winning. The World Food Programme estimates that the number of hungry people will increase by 47 million this year as a consequence of the war in Ukraine. Many people including those from Yemen will feel the crisis in their stomachs.

Fida is currently operating in countries where the humanitarian situation is deteriorating rapidly. Yemen and the Democratic Republic of Congo are experiencing one of the worst hunger crises in the world. In addition to these countries Fida is also bringing humanitarian aid to war torn Ukraine and Myanmar that is suffering from economic collapse.

Right now, we are raising funds for urgent food aid and psychosocial support for refugee children. Fida workers in Yemen and Congo are sharing alarming news. Extraordinary droughts and sudden floods have destroyed crops and inflation has pushed the price of food out of the reach of ordinary people. Children’s schooling is interrupted since they are needed to work to earn some income for their families.

There is an acute need for emergency fundraising. The rapid rise in prices has made it more difficult to bring much needed aid, the price of supplies and transport has multiplied in a very short time. Fida’s goal is that none of those promised help would be left without support due to rising prices.  – In Yemen, for example, the price of the food packages we distribute has risen by about 40% in a year, and by as much as 78% in some instances. At the same time, the number people suffering from hunger in Yemen is growing rapidly, says Maija Saarni, Head of Humanitarian Aid at Fida.

Fida’s humanitarian programme distributes monthly food packages to families who have no chance of earning a living. Due to the increase in prices, the contents of the packages have had to be slightly reduced so that help can be distributed to all those in need. Fida and a local partner organisation have also increased the programme’s self-financing by around 60,000 euros.

In Yemen, one of the poorest countries in the world, there has been a serious hunger crisis for the past seven years. Fida’s partner organisation operates in the province of Taizzi. The humanitarian programme prioritizes helping people with disabilities, the elderly and single parents. The programme distributes monthly food packages to 1875 households.

Employees of the partner organisation have interviewed each family selected to participate in the food distribution programme. One of these is Shaima* with her children. – Hunger has been like a constant disease for us. My children eat mouldy bread and get sick all the time. Even yesterday, we were crying from hunger, shared Sahima, she lives with her children in tent in a refugee camp. Due to their vulnerable situation, the Shaima and her family were selected to be apart of the food distribution programme.

Ekhlas* and his family shared that the regular food aid they receive has given them a sense of security. For years, the Ekhlas and his family lived in constant hunger, not knowing where they would get their next meal.  – We were already in a desperate situation. I’ve had to work for up to a month to buy even one bag of flour and a little salt. We could not even afford oil and beans. But now my children get the kind of food that was customary to eat here years ago. If there is enough of this food for a long time, I may also be able to pay off my debts. You can imagine how overjoyed my children were when they saw so much food at once!

A Yemeni mother who has started to receive humanitarian aid from Fida shared that was able to hug her child for the first time in four years. Until then, the need for survival had overtaken everything else.

*For security reasons, people’s names have been changed