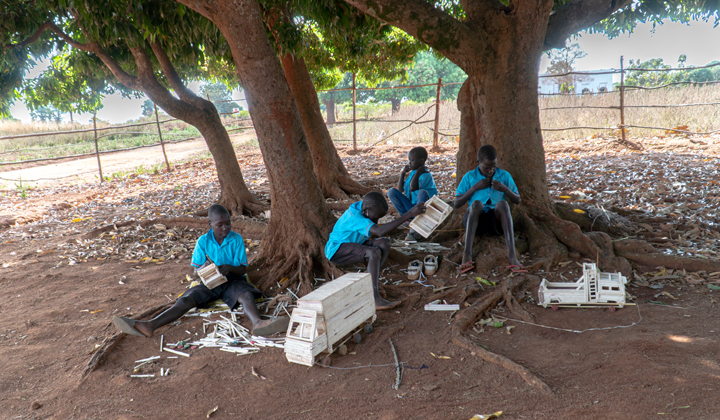 Playing connects children around the world. It’s natural for them in any situation. Refugee children in northern Uganda play with toys they have made themselves. Play and creativity help them recover from the horrors they have had to see and experience.

The right to play is a human right guaranteed by the UN Declaration of the Rights of a Child. Play is especially important for children in unstable conditions, when they have had to flee their homes. As a result of the war that began in South Sudan in 2013, about a million refugees have arrived in neighboring Uganda. The Bidibidi refugee settlement in Yumbe, northern Uganda, currently has 233,000 people, most of them refugees from South Sudan.

Refugee children don’t have any readymade toys, but use their own imagination and make their own. The children living in Bidibidi know how to make toys with incredible skill from clay, sorghum stalks and plastic. 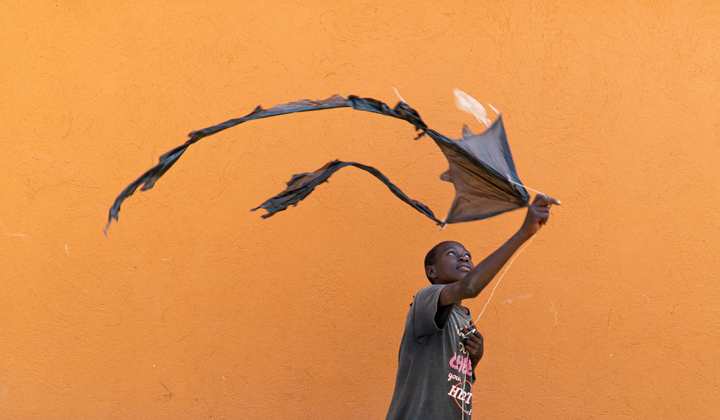 12-year-old Caesar holds a kite in his hand. There is no shortage of materials in Bidibidi to make a kite. There is no waste recycling so a lot of plastic  is thrown on the ground. At first it dumbfounds first-time visitors to the camp, but soon becomes part of the “ordinary” landscape. Here and there toxic gases rise into the air when piles of plastic bags and bottles are burned.

Caesar carefully lifts the kite into the air. It is made of discarded black plastic, two sticks and a string. The kite has three unevenly cut tails, two of which are made of black plastic and the third of dirty, clear plastic.

The midday heat is suffocatingly hot, more than 30 degrees. There is only a slight gust of wind in the air. The boy is standing in the shadow of the school building where he himself was sitting in class before the school had to close its doors due to the corona pandemic.

Caesar’s uncertainty has been replaced by pride and concentration. He holds the string in his hands and starts rocking the kite, making arches and loops above his head. He gazes keenly on the black kite hovering against the clear, blue sky.

The boy gets power from his kite. He smiles. He gets a breather from everything that happens around him. For a moment, he has moved into another reality where he is soaring in the sky with the birds and his kite. The stomach cramps from hunger disappear and the horrors experienced while fleeing the war in South Sudan are just a distant memory. The ear-splitting machine gun fire and deadly explosions are forgotten as the wind lets his creation fly.

When school is closed, Caesar has more time to play. For a fleeting moment, he feels free and happy. Creativity and play have a healing effect. They help you survive. The hum of the wind on the edges of a plastic kite is soothing and therapeutic. Caesar feels safe. 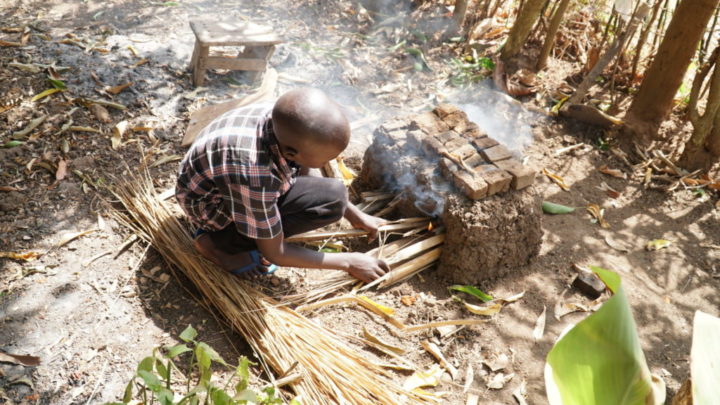 Sukran dreams of his own house

Ten-year-old Sukran, who lives in Bidibidi, proudly says that his father makes bricks. He himself wants to learn the skill of making bricks to build a house for himself. Sukran doesn’t know how to stack bricks on top of house walls or how to make doors and windows, but his 13-year-old friend Nazir has promised to teach him.

The process of making fired clay bricks takes about a month. Bricks are needed in Bidibidi as a building material for houses. First, the clay is collected and mixed with water to make it more durable. Brickmolds are filled with clay and the bricks are left to dry in the sun. Once they have dried, they are stacked to form a cylindrical structure. It is covered with a mixture of clay and sand. A fire is lit inside the structure, which is maintained for a day. As a result of the process, the brown, soft bricks become hard, red bricks.

Sukran has his own brick-making process in the yard. He has learned the skill by following his father’s work. The boy has stacked the bricks and is ready to light a fire.  He has collected grass, bamboo stalks, and other discarded wood, and has broken parts of the chair to burn. He places dry mango leaves to protect his structure, breaks off a tree branch, and throws it into the fire. The dry wood burns and bricks are produced.

In Bidibidi child labor is used to make bricks for the needs of adults. This has increased during a corona pandemic when schools are closed. The wet clay needed to make the bricks is heavy. Children may have to work all day under the scorching sun. When schools reopen, parents must decide if they will put their children back in school. The children help bring in extra income for the family – at school they would only incur additional costs. In Bidibidi, the number of school dropouts has risen sharply among school seniors who are allowed to return to school to prepare for final exams. 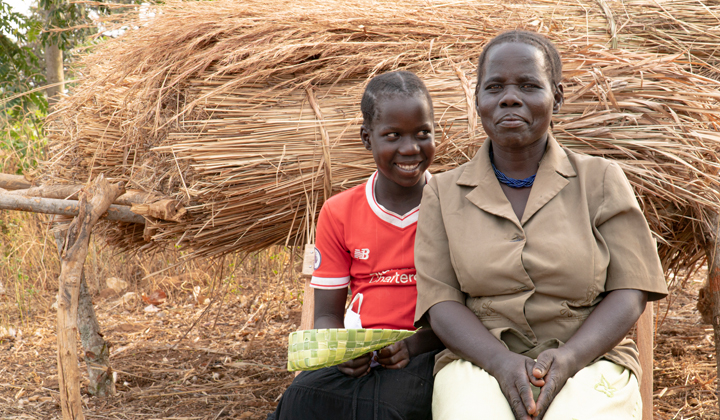 In the shadow of AIDS

13-year-old Nabila has just finished weaving a dustpan from palm leaves. She has not been to school for almost a year since it closed due to a corona pandemic. Her mother, Faima, says holding back her tears: “I am sick. I have AIDS. I don’t know what I should do.” Faima is one of the 38 million HIV-positive people in the world. Faima’s husband died of AIDS in 2016. In addition to Nabila, she has five other children.

Some boys sit in the shade of a mango tree making trucks. They forget the reality around them as they focus on building them. They skillfully cut the sorghum stalks to the appropriate length with a broken razor blade and use them as material in their creations. They make car tires from parts of worn sandals. The boys focus on building the best car ever. Finally, they drive a race to see whose car is the fastest and which can carry the biggest load. 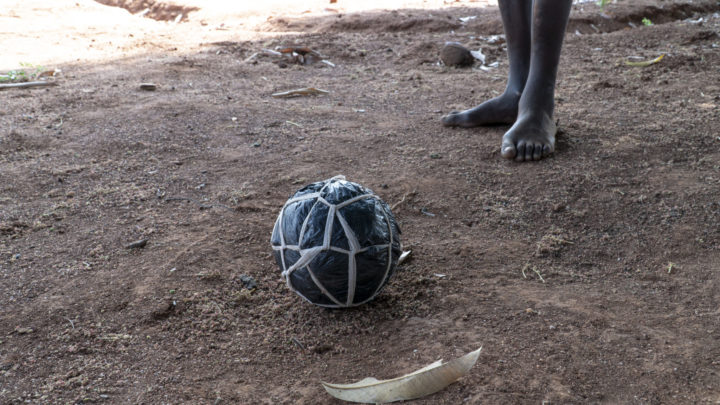 The most popular sport in the world

Bidibidi’s refugee settlement also has football pitches where children play the world’s most popular sport. They usually kick the football with bare feet. They make the football themselves from plastic bags and string, sometimes also from  clothes or banana fiber. 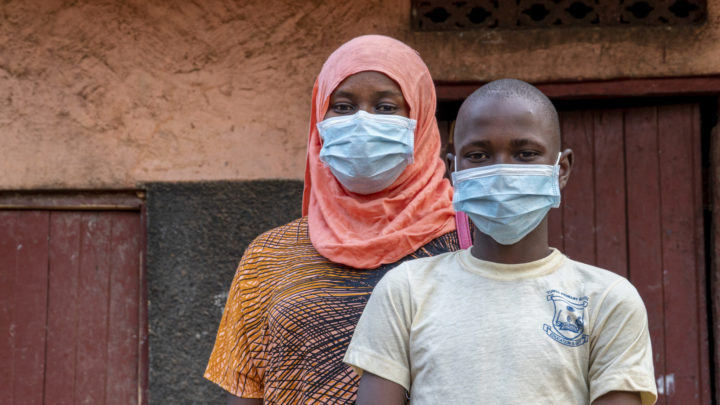 Abdul intends to become a professional

14-year-old Abdul dreams of being able to play football as a professional one day: – We don’t have football colleges or clubs. Could you support us by building a college where we could learn to play football better? 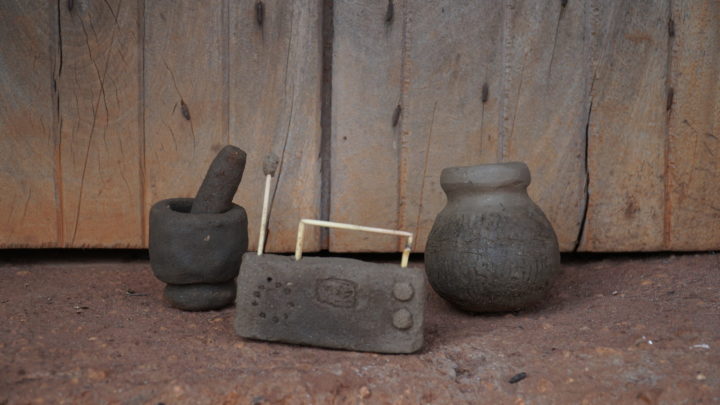 Clay is a material always available in Uganda. Children form different shapes and objects from lumps of clay: pots, dolls, mortars, radios, computers, airplanes, motorcycles, and everything else their imaginations come up with. They lick the drying clay regularly to moisten it and make it easily moldable. 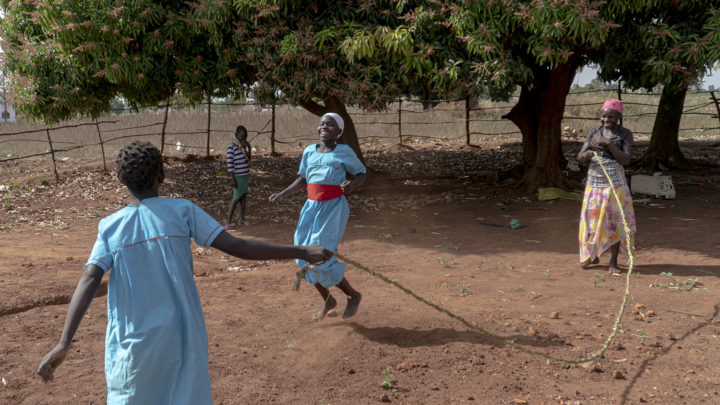 In Bidibidi, girls also make toys themselves. In addition to making pots and dolls from clay, they braid ropes from palm leaves and use them to jump rope. When children go to school, they don’t have much time left for play, as they have to do a lot of daily chores in addition to their homework. Now that the corona pandemic has closed schools, there is also more time to play. 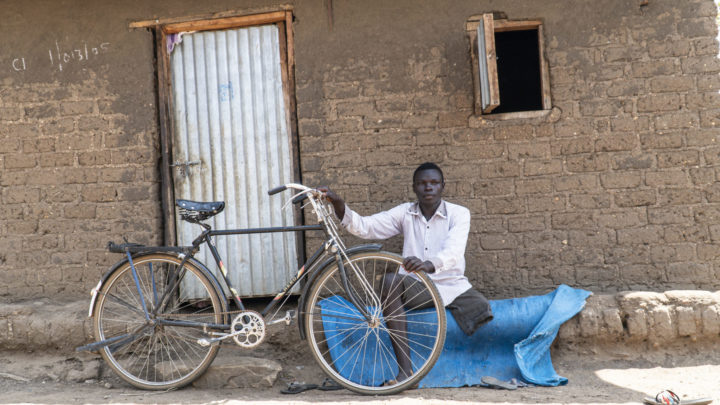 In Fida magazine 3/2020, we reported on Sabir, who injured his leg while fleeing South Sudan with his family. The leg had to be amputated. Later, Sabir built a house for himself in Bidibidi – on one foot. Now Sabir has learned to ride a bicycle. He hopes to get an artificial leg, his own bike, and study materials to continue his studies. 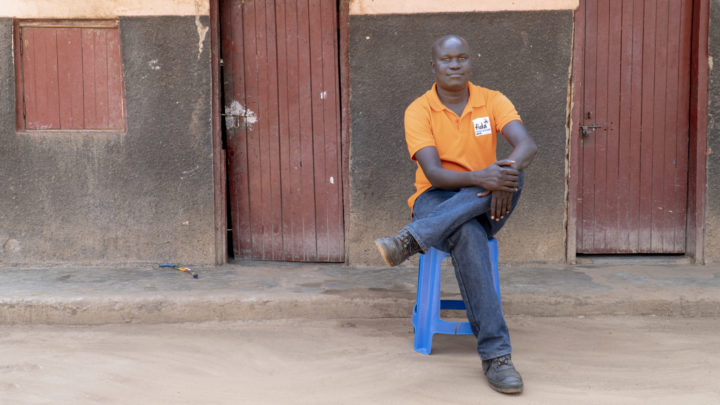 Francis is proud of his work

Fida’s office in Yumbe employs eight people. One of them is Francis Emechu. “I wear this shirt proudly every day because I know how much impact our work has in this community. We are an organization whose mission is to empower people. We share knowledge and skills so people can cope with the challenges of their lives. 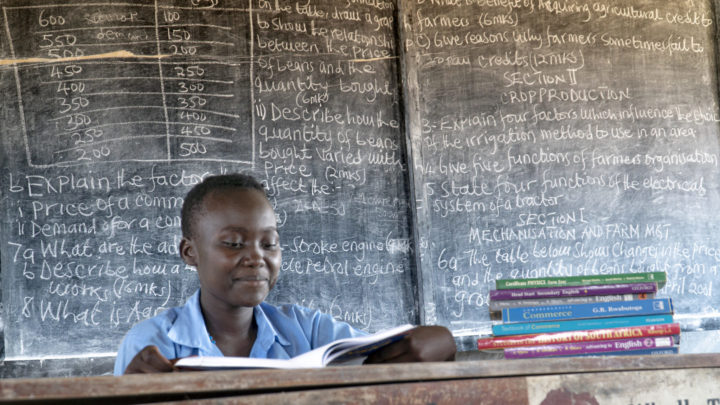 Fiona fled South Sudan in October 2016 when her home village was attacked. – A lot of people died in my village at that time. I do not know where my mother is because as we escaped, we were separated. I would like to continue to go to school, but there is  only my aunt to support me. It’s hard for us to cope: our land is rocky and dry, so it produces almost nothing. Fiona says that sometimes it is difficult for girls to go to school in Bidibidi. For example, due to lack of menstrual hygiene products one may have to stay home for several days. It slows down our studies. 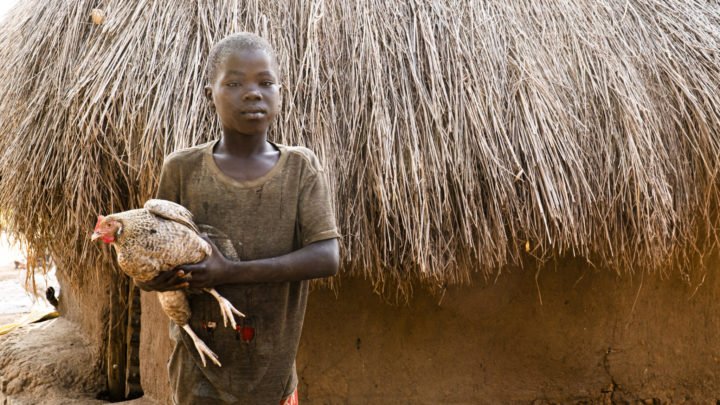 10-year-old Fred holds a chicken, an important livelihood for his family. Raising chickens is lucrative in Bidibidi. A group of parents of sponsorship children had first invested in one chicken. In just over a year, they had bought as many as 27 goats by raising and selling chickens. A goat is four times more valuable than a chicken. A wise investment! 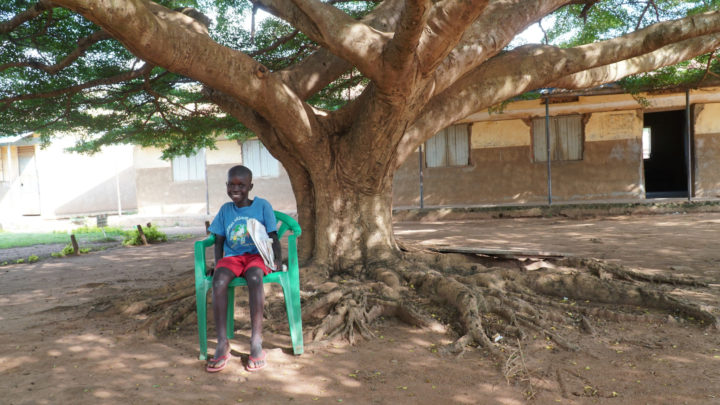 For the benefit of hundreds of students

Community sponsorship is a way to help the whole community. With the support of sponsors, Fida is developing seven schools in the Yumbe area.

– We do not help only one student, but hundreds of students. For example, we have built playgrounds in school yards. When students told us they couldn’t do their homework in the dark in the evenings, we provided all students with solar-powered lamps, Francis says.

Proceeds from this year’s Food for Life campaign will help Bibidibidi’s refugee children. You can find out more about this on the campaign page: eväätelämään.fi