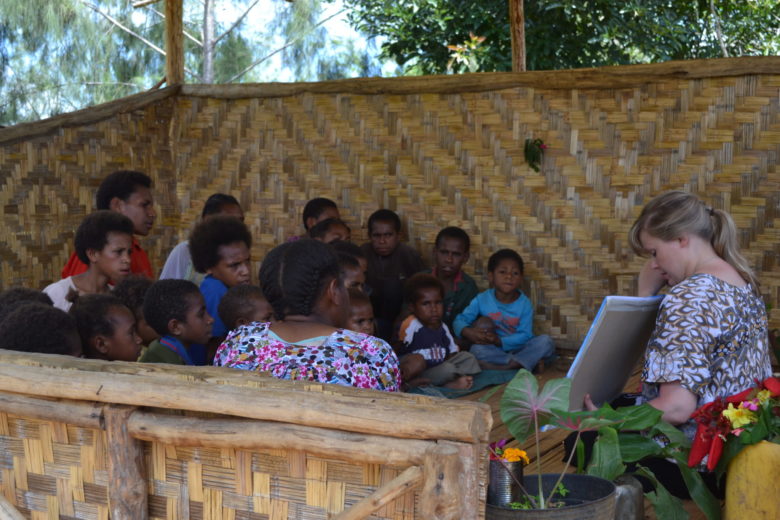 Marianne and Esa Pyykkönen's childhood dreams came true when they spent 13 years together in missions in Papua New Guinea.

Papua New Guinea is a beautiful, tropical country located north of Australia. The Pyykkönens lived on the main island, but the island nation includes several small islands. The landscape is mountainous, and many places can only be reached by plane.

Most people in Papua New Guinea live in primitive conditions and make a living from their own home gardens. Much of the country has no power grid and no running water. The population is very young compared to Finland.

– This is well demonstrated by the fact that when I hold the church’s Sunday School, there may be 50 children while only 20 adults listen to Esa’s teaching, says Marianne Pyykkönen.

More than 800 languages are spoken in Papua New Guinea, which brings its own challenge to communication. The main language of the country is tok pisin, which is a simple language based on English. English is also spoken to some extent in the capital and on the coast.

In Marianne and Esa’s childhood homes, missionary work was important and loved. Already at the age of five, Marianne had a dream that one day she would teach a group of children under a tree. At the age of 15, she moved to Papua New Guinea for the first time, together with her parents and brother. At that time, her father Jukka Tuovinen started working at a Bible school in Bulolo.

Esa’s parents were missionaries in Taiwan before he was born. Although the family did not return to full-time missionary work, missions was an important part of their daily lives. His dad made several missionary trips to Africa and guests from there visited their home. The desire to be involved in missionary work in one way or another led Esa to study international development cooperation.

When Marianne and Esa met, they asked each other if the other would be ready to go into missions. In their hearts, both were certain that it would be their work. They got married and started a family. Their first missionary term was filled at the Ukarumpa missionary station, where they were house parents to missionary kids for three years.

– We were a family of 15 people, with some extra young people. Over the years, we had a total of about 30 young people who studied at the mission station’s school, Marianne says.

After their first term in missions, the Pyykkönens completed a missions training program in Iso Kirja College. In January 2013, they received an invitation from the leadership of the Association of Local Churches (ALC) movement in Papua New Guinea to come and develop the country’s child and youth ministry. So, the Pyykkönens moved back to the Ukarumpa mission station as a family. Work began with the building of relationships.

– In this culture, it is important that we are known and that our word can be trusted. If the pastor does not get excited about a common vision for child ministry, there can be no Sunday school in the church.

The Pyykkönens did not want to take the lead in the country’s children’s ministry but wanted to give locals the responsibility right from the beginning. In 2016, a national child ministry committee was established, and nationwide child ministry meetings began, in which Sunday School teachers received support, materials, and encouragement.

In this culture, it is important that we are known and that our word can be trusted. If the pastor does not get excited about a common vision of child ministry, there can be no Sunday school in the church. 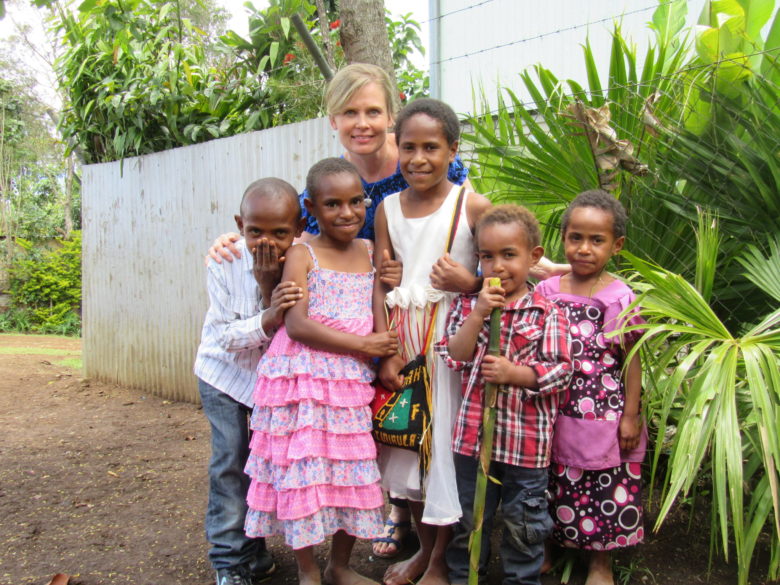 Translation work with a headlamp

In the same year, the Pyykkönens began translating Raili Väisänen’s and Mirjami Ylenius’ Bible Gems book series, as there was no Sunday School teaching material in the country. They adapted the books to suit the culture and main language of the country, translated them, did the layout, and published the books. The work was carried out in close cooperation with the locals.

– The first three books, published in 2018, were made together with two young Papuans. They came to us every weekday to work on a translation project with Esa. I served them lunch and coffee, and we chatted. In practice, we discipled young people during the process, Marianne describes.

During covid-19, Esa translated the fourth book while in Finland. He worked on the fifth book together with a local pastor, initially at the Pyykkönen’s home in Ukarumpa. When the pastor suggested that he could try to translate the book at home, he was given the teaching lessons in English, an exercise book, a pen, and a headlamp. The pastor translated the book at night in his grass hut using a headlamp. He returned with the translation and went through it with Esa, to see whether he had understood the original text correctly. Some of the special terms were challenging and he hadn’t heard some Bible stories before. Esa taught the pastor much more in addition to the translation work, and he learned a lot about the culture and practices of the country himself.

The translation of the sixth book was carried out by Matilda, director of the national child ministry committee, who is a trained secondary school teacher. The translation work was made easy by her language skills and profession. Matilda lives on an island from where you can only get to Pyykkönens by plane. She was emailed texts that she translated at home and sent for review.

Even though people are proud of their own languages, customs, and their group, the church members are very eager to create a sense of community. The message is that we are Papua New Guineans, we are believers, and we are doing the same work here.

According to Pyykkönen, the diversity of the country is also visible in the churches. Often the congregation is formed around one language group. Esa and Marianne use the country’s main language of instruction, which is well understood by most listeners. Because of this, direct interpretation is not required, but after the sermon, the pastor will review the main points of the teaching in the church members’ own language.

In Papua New Guinea, there are many inter-ethnic conflicts, and the groups often only pursue their own interests. However, faith brings unity amid the differences.

Even though people are proud of their own languages, customs, and their group, the church members are very eager to create a sense of community. The message is that we are Papua New Guineans, we are believers, and we are doing the same work here.

The longing for unity is also seen in the enthusiastic participation in nationwide church events. Although traveling is a challenge and flights are expensive, people put a lot of effort into these joint occasions. Major events are always divided between four main areas: mountain, coast, archipelago, and capital. This way, not only one language group or region is favoured.

The performances of different languages and ethnic groups are especially popular at gatherings. Conferences begin with processions, where each different group appears wearing their own colorful outfits and dancing. Marianne talks about her own outfit:

– The locals love colours. It’s very important for them that I also wear our regional costume. It is a wonderfully large dress in the colors of Pippi Longstocking: it is bright yellow, green, and red. 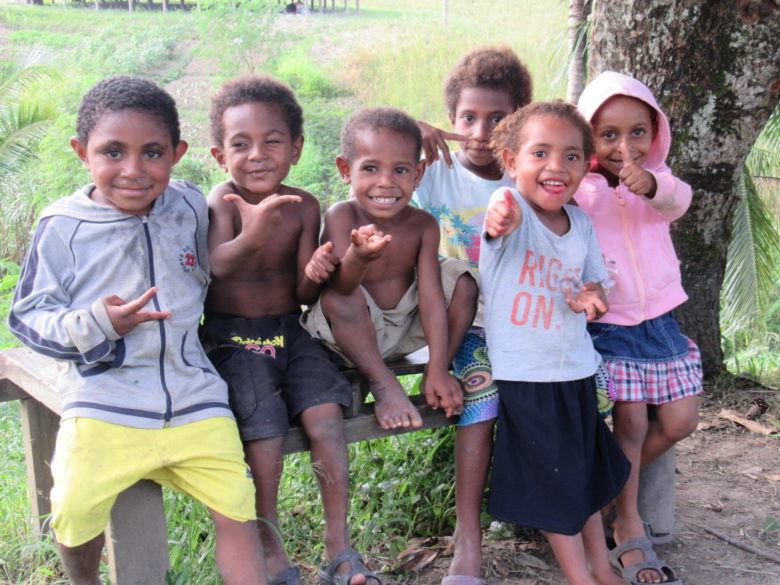 Missionary life with all your heart

In addition to the nationwide child ministry, it has been important for Pyykkönens to cooperate with the churches of their region. Popular camps with hundreds of children have been organized together. On weekends, the Pyykkönens visit the churches. Esa often has to preach, and Marianne teaches Sunday School in a grass hut or in the yard. A childhood dream has come true.

The Pyykkönens have always kept the doors of their home open to guests. Local pastors and their families have especially visited frequently. They drop in unexpectedly and we cook a meal together. Over the years, the friendships have deepened: we have shared joys and sorrows together and worked out difficult situations in the churches.

– Walking side by side in everyday life has been an important part of our work. You can’t just preach here on Sundays. Things go better when you know each other and have been able to grow together.

This has often meant that a planned day off has not been taken.

– Being here has been more like missionary life than missionary work, Esa laughs.

When this story comes out, the Pyykkönens will have already returned to Finland. It is a radical event for the whole family. Their grownup daughters, Lotta and Milla live on their own in Australia, but Papua New Guinea has been a dear home for them for many years. The family’s youngest, 19-year-old Emil has lived most of his life in Papua. He will graduate from an international high school before coming to Finland.

– This is the right time to leave, says Marianne.

– We trust the Lord to take care of us and the people over there. It’s a good feeling that we’ve given people time and we’ve worked together. We can honestly say that we will miss this. It’s great that the Sunday School books were completed, and the work was not left unfinished, but will be continued by the locals.