MISSION WORK AS A CALLING 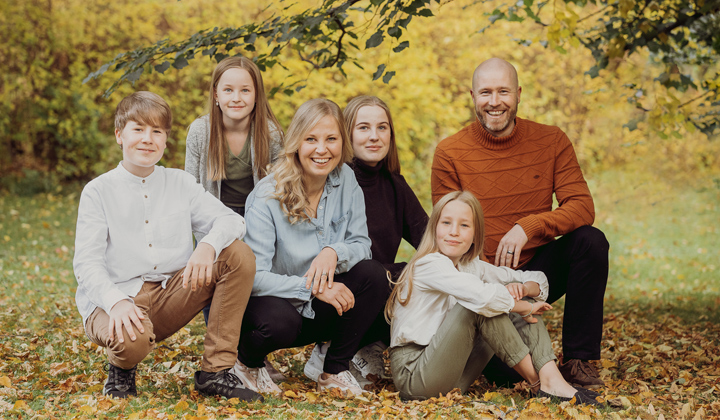 Samuel and Helena Tedder’s mutual calling has deepened during their marriage. After a long wait, they are now missionaries in Ethiopia.

When Samuel and Helena met in nursing school in the 90s, Helena asked Samuel to join a Pentecostal worship group. The couple celebrated their wedding in 1998. The Tedder family includes four children, Evita the eldest is 16, and the youngest, Linda, is 9 years old. The family has recently moved from Jyväskylä, Finland to Ethiopia. The children are excited to get to study at an international school in the Ethiopian capital, Addis Ababa.

Before I got married, I wondered if I dare to join in Samuel’s journey. I felt that I had the gift of helping and thereby a role in missionary work. I have been able to support Samuel especially during his studies by being with the children and providing for the family. My heart is also on fire for God, even though I didn’t have a strong personal vision about mission work when I was younger, Helena notes.

Helena has attended missions training, but she has worked as a midwife in the hospital’s maternity ward.

– The idea of ​​going into missions has developed in my mind over the 20 years which we have been together. We have always wanted to serve God with our gifts and have not thought that “then someday”. Now it feels easier that are finally where we have dreamed of for so long, Helena says.

The couple outlines their calling as multidimensional: In addition to God’s spiritual calling, It includes all their life experiences over the years.

– God has led us so that while we have served Him, we have also been able to acquire a wide range of resources for ourselves: cultural competence, education, spiritual work experience. All of these are a gift from God: He has given us these opportunities. I hope during this phase of life in Ethiopia that we can share that which we have received as a gift even more, Samuel continues.

– We want to be sent by Fida, the Pentecostal churches own mission organization. We value the organization’s history, experience, and all the work it does around the world, Samuel points out.

Samuel and Helena have three partners in Ethiopia through Fida: two Pentecostal churches and an organization focused on reaching Muslims. It is important for the Tedders that the local partners themselves invited them to work.

The couple has already studied a bit of the official Ethiopian language, Amharic, in an online course. They plan to spend the first year in Addis Ababa mostly studying the language and local culture, as in Ethiopia most people do not speak English.

– Finnish missionary work has a long tradition in Ethiopia. Many pioneer families have lived there and told people about the atoning work of Jesus and established churches. Now there are a lot of Christians in the country. They don’t need so many evangelists, but Bible teachers are needed, Helena notes.

Ethiopia has a traditional national Orthodox church, a large Lutheran church, and several million member Pentecostal churches. However, there are still many people groups who have not heard the gospel according to Samuel.

– Ethiopians themselves also want to send missionaries. They have asked for help with missionary training and missions work development. Fida has been involved in training them, and we also can help with that.

Tedder’s work partners also do social and health work. After her language studies, Helena hopes to be able to be involved in this work, for example by providing health education.

– We have been tested, but God has confirmed to us that we are leaving, because he has called us: Our support has worked out as churches have decided to work with us and we have received answers to prayer, encouragement, and prophecies. At times when we have felt weak amidst challenges and wondered how we will survive, God has given us peace and rest, Samuel portrays.

Cause of the corona pandemic, the couple feared that many congregations would no longer be able to support them in a weakened economic situation. To their surprise, however, no congregation withdrew. Instead, one more church was added as a supporter. The couple felt that God wants to encourage them. Seven churches from Finland and three from North America had pledged support along with some individual donors, when they received a phone call from a Canadian family friend in early September. The callers asked how they could support their departure to missions. Just at that time, Samuel and Helena were counting the growing costs of starting life in Ethiopia.

The timing of the call was amazing. We have felt God’s encouragement and presence when we have had a hard time, Samuel says.

An answer to the family’s prayers was also that all four children got places in the same international school. Additionally, the children also got a Finnish biology teacher, Taneli Halonen and his family, who were sent to work in Ethiopia by Fida and churches in Lapland.

The Tedder’s adventure began in early October as their plane headed for Addis Ababa.

Photo: Emmi Minkkinen. The Tedder family is excited to start their mission work in Ethiopia. In addition to Samuel and Helena, the family includes Evita (16), Jonathan (14), Amanda (11) and Linda (9).