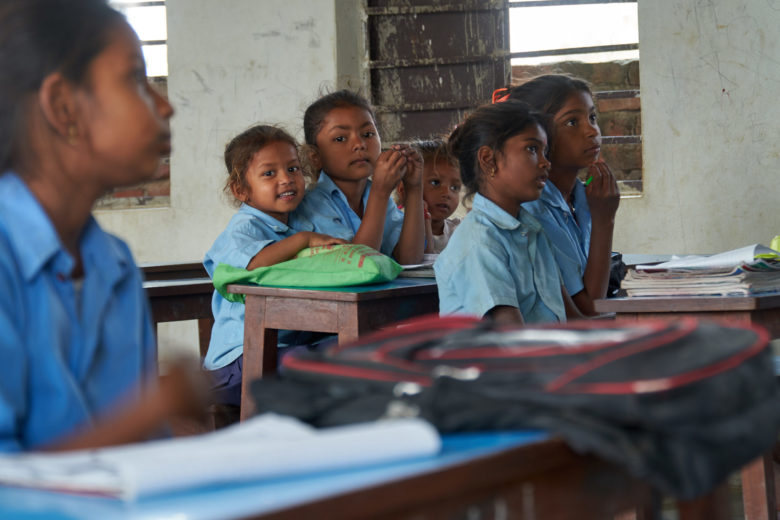 International Girls' Day, on 11th of October, aims to support girls: to remind them of their rights and to create opportunities for them to live without discrimination and violence. We work every day to make girls’ rights to education, health and safety a reality.

As early as 1995, the nations of the world, under the auspices of the United Nations, adopted the Beijing Declaration, which states that “the human rights of women and girls are an integral and indivisible part of universal human rights”. The Beijing Platform for Action strengthened the role of women in social decision-making and recalled that girls should also enjoy all human rights. The UN Sustainable Development Goal is to achieve gender equality by 2030. Indeed, equality in education has increased, with the number of girls not attending school halved since 1995.

The effects of the Corona are grim, equality at stake

The positive development in gender equality was interrupted by a global Corona pandemic. Corona has reinforced the existing challenges in developing countries, and the rights of girls in particular have weakened further. The effects of the Corona are seen as an increase in child exploitation, domestic violence, and child marriages.

Even before the Corona, 130 million girls could not go to school, and because of the pandemic, as many as 11 million girls are at risk of becoming school dropouts.

Girls’ schooling has also been interrupted and their dropout rate risen significantly. Although corona restrictions are easing up, girls have not been able to return to school in all countries.

Fida works for the rights of girls

Girls’ rights are at the core of Fida’s activities, and we work every day to ensure the fulfilment of girls’ rights to education, health, and safety. We aim to identify the root causes of inequality and to influence the structures that perpetuate gender inequality in our projects.

Educating girls is an important way to reduce extreme poverty, as education protects against many risks. Girls who do not go to school are threatened by teenage pregnancies, forced marriage, and violence. We promote girls ’access to education, for example, by offering distance school packages, and building separate toilets for girls so that schooling is not interrupted due to menstruation.

Every year, tens of millions of girls miss school days because of menstruation. Menstruation is associated with shame and false beliefs, and health counseling is not available in poor areas. Fida’s programs improve sexual and reproductive health services and provide training on topics such as the harm of circumcision, teenage pregnancies, and menstrual hygiene. Our training reached 6,000 girls in Africa last year.

Paula Konttinen from Kenya works as Fida’s regional program manager for East African development cooperation. More than 100,000 girls and women in Burundi, Kenya and the Democratic Republic of the Congo, Tanzania and Uganda benefit from our regional program.

In East Africa Corona has stopped recent progress and increased inequality. In Kenya, for example, millions of children were left without education when schools were closed for up to nine months. Remote areas do not have access to distance learning because families do not have electricity, internet access, computers, or smartphones. According to Konttinen, the situation has increased the sexual exploitation and abuse of girls. Teenage pregnancies have also increased as many girls are tricked into sex under the guise of money.

School has protected many girls from early marriages and circumcision. Now these are also on the rise as the children stay home.

– When the schools were closed, many no longer had access to menstrual pads, and some girls have even had to sell themselves to get money to buy sanitary napkins, Konttinen says. That is why Fida has given menstrual pads to 1,000 girls during the Corona period.

It is also important to involve boys and men in the work so that menstruation is no longer taboo. Men also train communities about menstruation in our projects, and up to 75% of men who have participated in training now feel able to talk about menstruation with their daughters. Men learn to respect their right to self-determination, resulting in less violence and exploitation against women and girls.

Hope and future for the girls of the world

International Girls Day is a reminder of how much discrimination and unfair treatment girls continue to face around the world. Crises such as Corona and protracted conflicts effect the most vulnerable the most, women and girls. Girls’ rights are also sidelined in social decision-making and peace-building processes.

That is why we train girls as well as parents and teachers on children’s rights. When girls are aware of their rights, the potential to make decisions about themselves is realized. However, we need to invest in girls’ education and health care, so that all girls in the world have the opportunity to develop their potential and pursue their dreams.