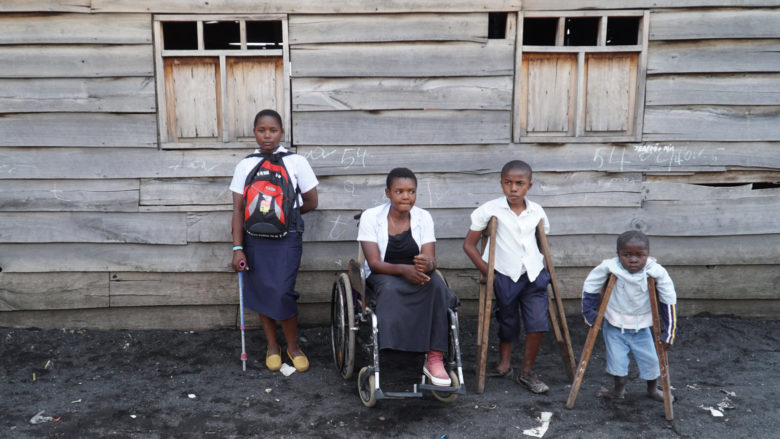 18-year-old Safi lives in the village of Kamuronzan in the DRC. Safi has been blind since birth. She is currently pursuing higher education in commerce. However, it’s not a given that Safi can go to school.

Safi is originally from western Congo but had to move more than 3,000 kilometers to the other side of the country to North Kivu, when the state forcibly displaced people because of the second Congolese war. When Safi’s father died, the family had to move again. Safi lost her mentor who was her volunteer guardian and supported Safi, so that she could complete her studies despite the blindness.

Eventually, the family found a new home, and Safi was able to begin her studies in commerce and administration. However, the conditions were difficult, as Safi no longer received enough support to study.

– I was already preparing to fail in my studies, and I was afraid of being rejected, says Safi.

At school, Safi participated in the joint Elimu Haki program of Fida and the local CEPAC Pentecostal Church. Through it, Safi received psychological support as well as financial support for her education, such as study materials. Thanks to the support she received, Safi was finally able to focus on her studies – and it paid off! She graduated from school with excellent grades.

– I am so grateful to Fida and CEPAC for all the support I received. Participation in the Elimu Haki program has changed my whole life, Safi rejoices.

Now Safi plans to continue her studies and dreams of becoming a journalist. In honor of the International Day of Persons with Disabilities, she delivered a speech at her school emphasizing the importance of education for girls with disabilities. Her family and teachers were proud and encouraged her.

The journey from a bullied outcast to top student

As a baby, 12-year-old Wivine was involved in a serious accident in which she was badly burned. Wivine spent a long time in the hospital, but even after the treatments, her body shows burn marks. Her parents found Wivine’s burns too dreadful for others to see, so she spent her childhood locked in her home, hidden from view. Rarely, when Wivine got to go outside, the village children mocked her and called her names.

When Wivine reached school age, the local schools refused to admit her as they feared that her presence would cause other students to leave the school. Eventually, one of the schools in the area agreed to take Wivine as a student. Soon the teachers at the school realized that she was very smart and an excellent writer. This is an incredible achievement considering that Wivine hardly has any fingers at all.

The first months of school were difficult as other students found Wivine strange. So Fida and CEPAC held events at the school to talk about the rights of people with disabilities and inclusive education. Gradually, the schoolteachers and other students have realized that there is no need to be afraid or ashamed of Wivine. Now Wivine is in the fifth grade and succeeding brilliantly. She has fun at school because she has made friends there as well.

Training for teachers, information for parents

In the Congo, people with disabilities are often discriminated against, and a child with a disability may even be considered a curse. An unusually large proportion of children are disabled because of the decades of armed conflict, and up to three children are permanently injured for every child who dies in war. Children do not have the aids, such as crutches or wheelchairs, that would be necessary to go to school. Schools, on the other hand, lack the necessary resources and up-to-date knowledge and understanding of the support that children with disabilities need.

Fida works in the Democratic Republic of Congo with the local Pentecostal Church (CEPAC). Inclusive education for children with disabilities is promoted, especially in the eastern part of the Congo and in the city of Goma. In addition to advocacy and training, Fida and CEPAC have built a barrier-free school in Goma that serves as a model for inclusive education in the area.

– The quality of teaching has improved tremendously when teachers have been trained in different teaching methods and the learning needs of children with disabilities, says Mtabi Mieci Bacari, headmaster of the local school.

Children who were previously hidden in their homes now have hope and a future.

Fida works to make the rights of people with disabilities a reality in 15 fragile countries. In the Democratic Republic of Congo, Fida works with the support of the Finnish Ministry for Foreign Affairs. In 2020, the Congo Country Program had a positive impact on the lives of more than 351,000 people.