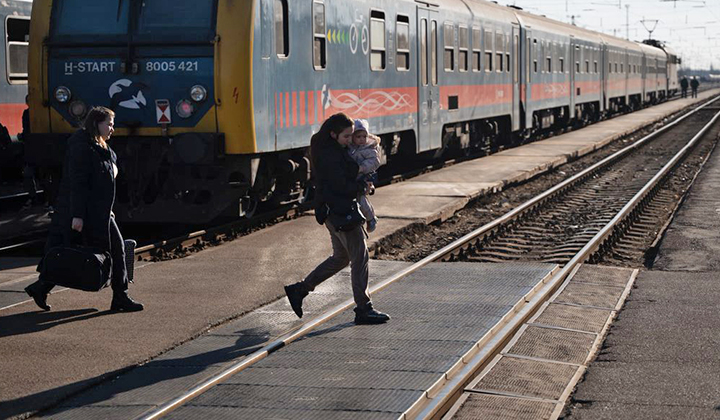 Fida's aid for Ukraine and refugees from neighbouring countries will continue for a long time. Besides emergency accommodation and food aid, we will start psychosocial support training.

Aki Salminen, humanitarian aid coordinator for Ukraine, recently visited Hungary and Ukraine, where he reviewed the situation at the Hungarian Baptist Aid centres, Fida’s local partner. They are helping about 2000 people, of whom 800 are on the Ukrainian side.

Salminen visited the Ukrainian city of Berehov in remote Karpatia. There are an estimated half a million internally displaced persons in the region. It is estimated that there are 20,000 refugees in Berehov alone. No one knows the exact number, since only some of the refugees register themselves in the city where they stay on the way.

Fida started distributing food and basic supplies in Ukraine together with Hungarian Baptist Aid in mid-March. The aid is coordinated together with the city and mayor of Berehov. In addition to emergency accommodation, refugees receive food and basic hygiene supplies, such as soap, from the centre. Those staying outside the centre receive food supplies for about a week at a time. In total, about 400 people receive regular food aid.

In addition to the workers, Salminen met refugees staying at the centre. What Salminen remembers mostly, were the people’s eyes. There were people who arrived the night before from Kramatorsk, after 2-3 days of travelling and finally reaching safety. With heavy hearts – you really felt it there. People’s eyes were blank. The children sat motionless and just stared.

The bombing of civilians in Kramatorsk hit international news. According to BBC, 4,000 people were waiting to be evacuated at the train station when it was struck by two missiles. Aki Salminen says that the situation of refugees is characterised by uncertainty. Some people stay in Berehove, some go to Hungary or Slovakia, others try to go back to Kiev, but that’s very risky. If you had to flee abroad into the unknown with only the clothes on your back, it would make anyone nervous, but it scares you even more, if you’re poor, and only used to living in your own country. And if you leave, when will you get back: will your home just be a bomb crater? And does your hometown even exist anymore, Salminen portrays.

The need for psychosocial assistance will be long-term, both in Ukraine and among refugees outside Ukraine’s borders. Salminen says that Fida will start psychosocial support training for Ukrainian and Hungarian workers and volunteers in May. The training will take place in Hungary, and also in Ukraine, if possible, since Ukrainian men cannot leave the country. The two-day training gives workers tools for interacting with a person who has been traumatised and needs immediate crisis assistance, how to approach the traumatized, and simple tools and exercises to help open emotional locks. The trainer is Heini Sirén, a Fida psychosocial support specialist currently living in Iraq and with extensive experience in various places of crises. The plan is also to organise family camps for Ukrainian refugees on the Hungarian side.

According to Hungarian Baptist Aid, the needs for help are enormous. There is a need for medical assistance, and Fida will try to respond to it. Hospitals are still operating in Ukraine, but many of them are ineffective since many doctors have fled. A doctor visits the center a few times a week. Many basic illnesses lack regular medication. We aim to provide basic medicines, and there are also plans to set up a mobile clinic. It would move around in a van, and a doctor could get to villages to carry out basic procedures, says Aki Salminen.

A painful decision – my son stayed in Ukraine