Fida in Ukraine: Peace in her heart in the middle of war – 32-year-old Nina explains why she stayed in Ukraine 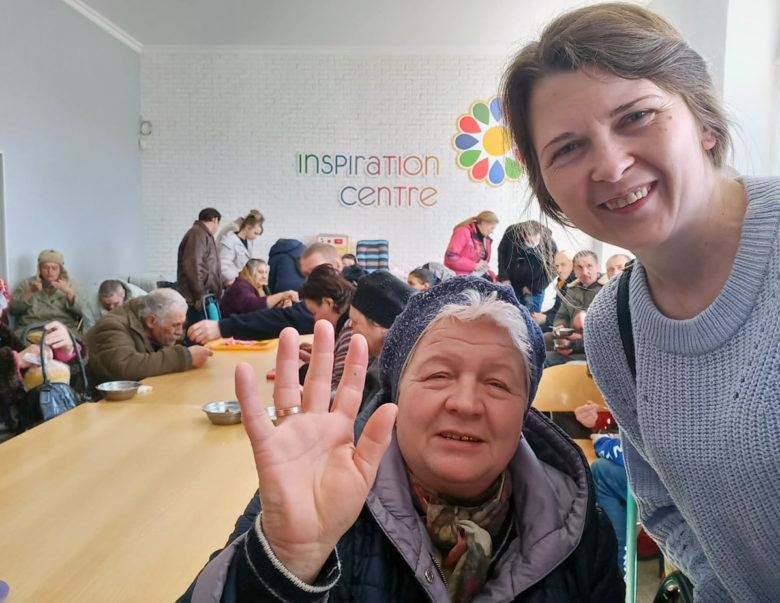 When the others left, Nina Ognivchuk (right) remained amid the war to help those fleeing the bombings. The centre she runs provides temporary lodging for those who need it. She says that God has given her strength to continue amid the chaos.

On the first day of the war, 32-year-old Nina Ognivchuk faced a difficult decision: whether to flee or stay home in Ukraine, where Russia had just invaded. She had a visa for Britain, and friends asked her to come to safety. “We’ll get you a ticket, just pack your things and leave while you still can,” they said. The shops and banks were already in chaos. In the first few days her hometown was attacked with rockets. As Nina folded her hands in prayer, she felt God urge her to stay.

– Peace came into my heart. That’s how I knew I made the right decision, says Ognivchuk.

Nina Ognivchuk is from Shepetivka, western Ukraine, where she is the director of Inspiration Center, supported by Fida. The Christian Action Centre organises clubs for deprived Ukrainian Roma and mainstream children, gives training for adults, marriage counselling, and Bible lessons. The staff also make home visits.

On March first, the centre planned to celebrate its 5th anniversary. Instead, that was already the 6th day of the war and Russia warned that it would launch targeted attacks on Kiev.

– I never thought that instead of a party, we would be in a war. It’s still hard to understand, says Nina Ognivchuk in a WhatsApp video call.

She’s willing to give an interview but warns that there may be interruptions. Even now there are several families with children accommodated in the centre. The centre turned into emergency accommodation overnight when the war started. Some guests have lived at the centre since the war started, others have stayed a night, and continued their journey to neighbouring countries. If they are travelling to Romania, the centre volunteers take the refugees to the border by car.

Volunteers are collecting people to safety in the Kiev area by van. The activity is dangerous and requires planning. The evacuation is coordinated together with partner churches who report about those trying to escape.

– Not everyone has phones and volunteers acting as contacts run the evacuation on site. We can’t set an exact pick-up time or even location because we don’t know when we can get there. There are roadblocks, traffic jams, and shooting on the way. Sometimes the trip takes all day. You can’t travel during curfew.

The cars have big stickers that say CHILDREN in large letters. Yet last week there was a major setback when three volunteer drivers came under fire from the Russians. One man was killed, another was hospitalized, and a third disappeared. His fate is unknown, and Ognivchuk fears he has been captured by the Russians. The attacks took place on the way out, so luckily the cars didn’t have any other passengers.

Despite the danger to life, volunteer drivers have been found. One of them is Nina Ognivchuk’s own father, who has already made several evacuation trips.

– He asks my mother for permission to leave, because he doesn’t know if they’ll ever see each other again. My mother lets him go. Saving lives is now the most important thing for everyone.

Getting married without a wedding dress

Since the war broke out, the staff has been reduced from eight to two. Nina Ognivchuk is responsible for the centre’s activities together with another young woman, Lesia Kulcha, from Odessa. Three male centre employees were forced to flee the war with their wives and children. The centre’s other female employees got married in early March.

– All three women were already engaged. They had planned a wedding together with their fiancés for late spring. But the war changed their plans, and the women decided to marry right away – all on the same day. The occasion was simple, with no bridal dress and no party. Just the pastor’s blessing and a meal. I couldn’t get there myself because I was needed at the centre, Ognivchuk says.

Ognivchuk doesn’t have her own family. She says that is why she’s now able to help full-time.

There’s so much work to do. Ognivchuk has worked long days since the beginning of the war, and sleeps in the center. Although Shepetivka is a long way from the fighting so far, and the townspeople are reasonably safe, the curfew applies to them too, Ognivchuk says. Between 8 p.m. and 6 a.m., you can’t leave the centre, because you may get shot by Ukrainian soldiers on the street.

Early in the morning, Ognivchuk heads to the market to buy milk, bread, and meat. The price of food has risen, but so far, food is still available in shops and markets.

– If a product is missing due to the blockade, we buy something else. With fuel the situation is different, it’s hard to get, and very expensive. 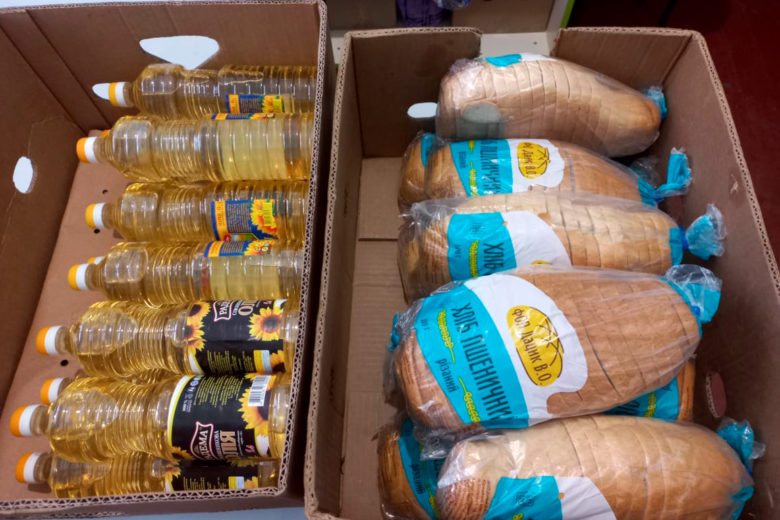 The kitchen shift prepares a lot of food and packs it for those who need it. The package often includes pasta or potatoes, bread, and tea bags.

The day is spent on everyday chores, such as laundry, as many overnighters leave, and the new visitors need clean bed clothes. Many

people lack clothes or detergent, and some don’t have ID papers. The center tries to help and provide essential supplies to the arrivals.

– We never know how many people will eat at the dinner table, but every day newcomers arrive. Some will continue ahead immediately. We have succeeded to pick up whole families, now dozens of them, even from dangerous places, says Ognivchuk.

Amid all the grief and death, there has been some happy news. A week ago, the centre hosted a joyful family event: one of the women staying at the place gave birth to a healthy baby in the hospital near by. Another expectant mother is due to give birth within a week. Fortunately, the bomb shelter is only a stone’s throw from the centre, and that’s where the residents go to safety during the air raid alarms.

Every day, a prayer meeting is held at the centre. They try to do something nice with the kids sometimes. Nina Ognivchuk says that the day before, together with the church, they arranged a bicycle ride and played ball games with the children on the riverbank. 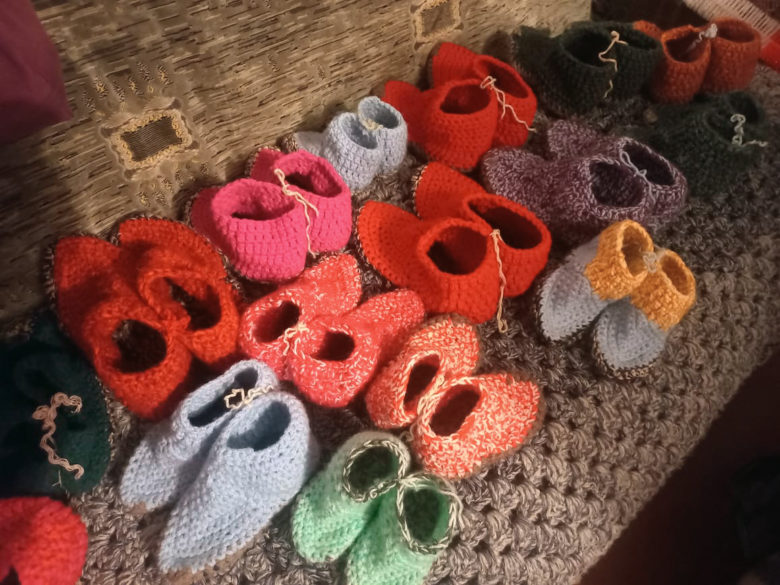 A mind full of hate

Ognivchuk says that the language of those fleeing eastern Ukraine is saturated with hatred: hatred of the Russians and Putin. Hatred for God. Ognivchuk understands. She says people have lost everything they worked so hard for. She talks to those staying at the center. It’s easier to connect with children, but you need patience with adults. It’s hard to calm them down.

– In a couple of days, we get to know each other, and good rapport is gradually established. Even though I do everything I can to get people to safety, the greatest concern and pain I have is for souls. People die without God. Of course, I ask for peace, but above all, for them to turn to God. Very few of those arriving from eastern Ukraine have ever read the Bible. I wish I had more time to talk to the refugees in peace, Ognivchuk ponders, saying that she asks God for wisdom and love.

A big help from Finland

The center has received a lot of help. Fida supports the operations financially and Finns have prayed regularly for the Inspiration Center.

– You Finns have helped us so much. Without your help, we couldn’t do all this. A big thank you to you all!

The locals also help. A lot of people are now out of work and want to be helpful where needed. There are plenty of volunteers. But Nina would like if they could get a pastor for the center.

– Ukrainians are now looking for help from churches. We need a pastor who could teach and serve as a counsellor.

At first, Ognivchuk had trouble sleeping. Now she’s so tired that she doesn’t always wake up even to the sirens, which means running to a bomb shelter. Often, she falls asleep with her clothes and shoes on, clutching important papers in her hand.

– You never know when you may have to flee. A day off seems to be far off in the distant future, but I am privileged compared to the soldiers sleeping outside in the cold.

And is Ognivchuk afraid herself?

– No, I’m not afraid. We do this with love, and God is above everything, she answers without hesitation.

The days go by doing chores, and Nina regrets that she doesn’t have enough time to focus on prayer. When she has a moment of her own time, she listens to music or reads psalms.

Thank you for praying for us. We can feel it. You have more time now. When Moses got tired of praying, the other men supported his arms. You are now the ones supporting our hands. Fida is providing emergency aid to Ukraine. By donating, you can help. Remember the work in your prayers also!

Thank you for praying. When Moses got tired of praying, the other men supported his arms. You are now the ones supporting our hands.