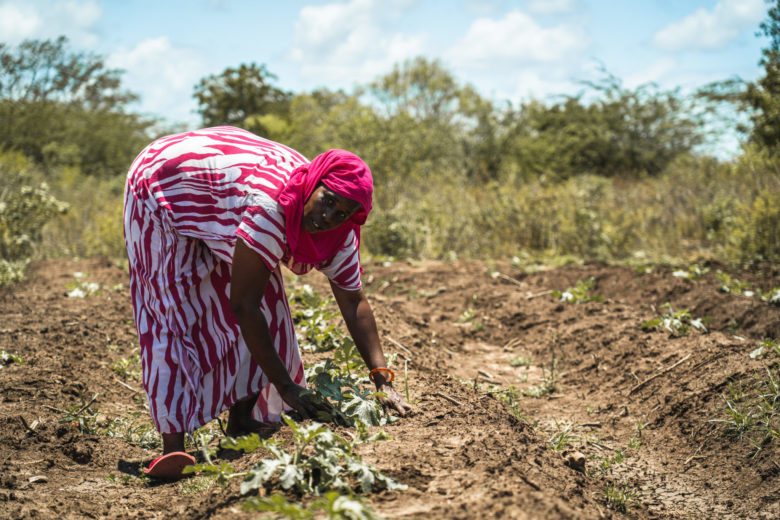 Fida, with nine other Finnish development cooperation organizations, participated in the Red Nose fundraising campaign 2020 for the children of the world. With this support families in Kenya can reap a harvest despite the distressing drought in the area.

Help is needed now more than ever. The global coronavirus pandemic also affects vulnerable communities. Fida’s work in East Africa includes food security projects to ensure that families have adequate and safe access to food. These projects include courses that teach a variety of cultivation techniques.

Fida works in several places in Kenya, including villages in the Tana River district. Halima Dame, a mother of five, initially hesitated to begin farming, but became enthusiastic about it in a course organized by Fida’s development program. Now she works hard to cultivate a variety of vegetables such as maize and tomatoes on the villagers’ common plot. Previously Halima didn’t know about farming, as her community was a pastoral community engaged in animal husbandry. However, the lack of water and food made livestock farming more difficult. One cause of water scarcity in East Africa is climate change, resulting in irregular rainfall. The situation in the area is very challenging. In Kenya’s coastal region on the Indian Ocean, the desert is slowly creeping further south, and droughts plague the area more persistently. In the Tana River area, the challenges of water availability have even led to conflicts between different groups.

Water scarcity is the biggest challenge

The biggest challenge for agriculture in Halima’s home village is drought, which also affects the available yields. Nevertheless, Halima and the other villagers expect a good harvest as long as there is enough water. In addition to the lack of water, the challenge for the villagers is the wildlife that destroy the unfenced crops. Cultivation is also hampered by pests and a lack of fertilizers.

Halima and many small farmers in the area participated in a training course organized by Fida and the local partner to teach water-saving farming techniques developed for the growing needs of arid areas. Community members have also been made aware of the harm caused by cutting down trees, which causes erosion and receding ground water making cultivation even more difficult.

– This type of farming is more environmentally sustainable than previously raising animals, Halima says about the new farming techniques she has learned.

Growing tomatoes to get to school

According to Halima, the village community has had a good harvest from their crops and the villagers are very hopeful that they will continue to benefit from good yields. She says tomatoes in particular are beneficial to the community. Tomatoes are sold at the market, and the income they generate can be used to take care of the basic needs of families, especially children. Before starting farming, Halima had to buy all their food from the store, and it wasn’t always enough for the whole family.

– It’s great to have your own grown vegetables to meet the family’s needs, Halima says.

– From the profits from selling vegetables I have been able to save for my children’s school needs, she happily continues. According to Halima, some members of the community have even been able to build simple dwellings thanks to the income from cultivation.