Nineteen-year-old Irene sat at the Zahóny border, waiting to continue onwards. Her mind was in turmoil. Fear, that her baby will enter the world at a train station. For three days, Irene waited for help with her mother and siblings. Before this, they had waited a long time on the Ukrainian side to cross the border.

After three days of waiting, Irene’s family was housed by Fida’s partner, the Hungarian Roma Mission. Around the same time, the little one also announced that he was tired of waiting. The young mother was rushed to a Hungarian hospital. On the second of March, a week after the war began, Irene gave birth to a healthy child. Now Irene sits on the sofa-bed in emergency housing and appears calm.

– I was really scared that the child would be born at the train station. That’s probably why he was born before his time, when I was so stressed, Irene says.

According to Irene, the childbirth was easy and not very painful.

– I am grateful for all the help I received at the hospital, she says.

The child born in evacuation is Irene’s second. Her first one died of illness when he was just an infant. The father has not yet seen his child, as he had to stay in Ukraine. Irene’s sister also decided to return when homesickness and uncertainty overwhelmed her. Irene has no intention of returning. Her mother agrees, because there’s not enough food left in their home area.

A room in the emergency accommodation is reserved for the mother and child. Blankets are neatly folded in a pile, and there is a stack of clothes in the corner. There’s a cot in the other corner with a few clothes in it. There’s a fridge in the corner where Irene’s little brother goes to get a juice-box. 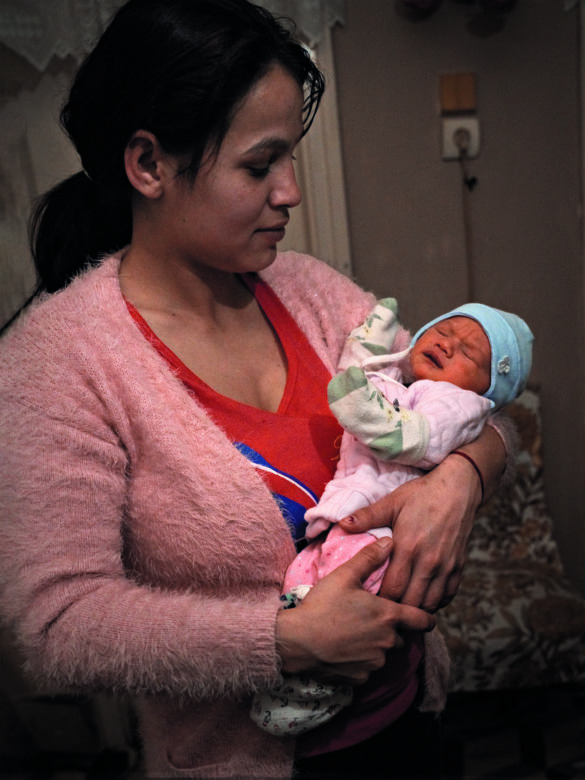 Irene, dressed in a pink cardigan, gently holds the little bundle in her arms. His hands, covered in small socks, sometimes rub his face and the baby frowns. Otherwise, the little one sleeps peacefully – completely unaware of the uncertain and chaotic situation into which he was born.

– I don’t know what I want to do, or where I want to go, Irene shrugs her shoulders.

Leaving your home and giving birth has drained her strength. Irene yawns. Even though the little one sleeps well at night, he wakes up the young mother at 5:00 in the morning.

Despite everything, the child was named Abram –father be praised. In the middle of everything, he’s completely innocent and amazing. A small innocent child who deserves a chance to have a safe childhood without fear or deprivation.

Help for those who can’t get it anywhere else

Fida’s aid in Ukraine and the surrounding areas started soon after the war started. According to field reports, refugees lack basic living supplies. Many of those who were vulnerable already in the Ukraine, such as the Roma, have faced discrimination even during this crisis. Women and children travelling alone face the considerable risk of becoming victims of human trafficking.

With the help of Fida’s partner organisations and churches, those fleeing the war, have received reliable and safe assistance. Aid has been launched in Ukraine, Hungary, and Romania. It has met everyday needs: emergency accommodation, food, hygiene supplies, medical needs, and warmth. In the long run, the aim is to give psychosocial support for those who have experienced trauma. The aid is expected to help more than 50,000 people.

Each location tries to help the most vulnerable people. For many, the most important thing now is to be safe. Starting a new phase of life is not easy. The scars of war will remain and live on. By donating, you can help.