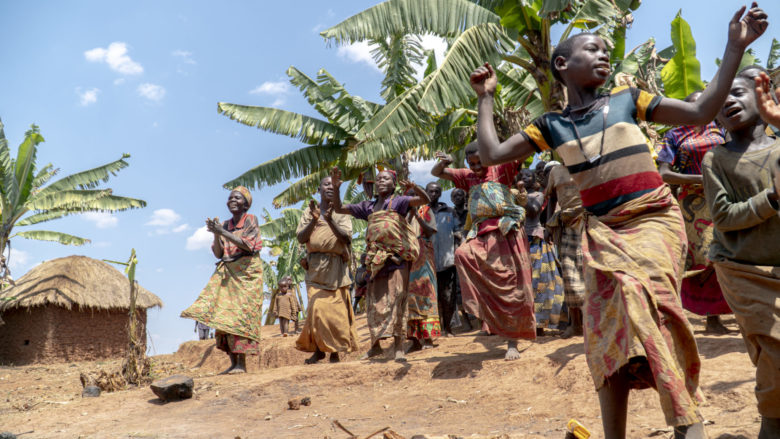 The village of Rusengo in Burundi has undergone enormous change in just a few years. It shows that a lot of good can come out of a seemingly hopeless starting point.

The temperate wind gently moves the large leaves of the banana trees, causing them to rustle like a whisper. The sun shining directly from above makes the shadows formed by the leaves on the red soil look like hands reaching out of the trunk. The banana trees stand in the middle of Rusengo village in Burundi. A lot has happened around them in recent years. If these trees could talk, they would have quite a story to tell.

Hannu Happonen, communications designer for Fida, has visited Rusengo village often over the years and has seen the change.

A village without a smile

Fida’s Burundian partner church, the Communauté des Églises de Pentecôte au Burundi (CEPBU), began work in Rusengo in 2018 as part of Fida’s development cooperation. About a hundred sponsors from Finland support the programme. Happonen visited the village for the first time in 2018.

– Rusengo was the most miserable place I had been to at the time, Happonen recalls.

Happonen’s words are validated by the fact that for more than 20 years he has visited dozens of slums and crisis areas, amid poverty and distress. Happonen’s first contact with Rusengo touched something in the heart of a man who had seen a lot.

– Utter hopelessness filled my mind. I asked myself, could there be anything worse?

Happonen was shocked by the fate of the Batwas. How Burundi’s indigenous people lived in terrible conditions, without the right to own land, access to education, or even to have ID papers. For these reasons, the Batwas had also ended up close to the heart of CEPBU.

The problems ran deep. Burundi is one of the poorest countries in the world. The civil war based on disagreements between the Hutus and Tutsis raged from 1993 to 2005 did not help the situation. The Batwas are only about a one percent minority living in the country of 12 million. Traditionally the Batwas made their living by using the forest products. Now the areas have been cleared for coffee and tea plantations and the remaining natural forests are protected areas. Traditionally, Batwas were skilled potters. However, plastics replaced traditional clay pots and there was no longer a demand for Batwa handicrafts. Their traditional culture practically disappeared.

– Utter hopelessness filled my mind. I asked myself, could there be anything worse?

This was reflected in the faces of the villagers according to Happonen:

– The people were very apathetic and didn’t react to me in any way.

Not even a smile was cracked when Happonen dug out his camera. Usually, this causes children react with excitement and they surround the photographer willingly. But this did not happen in Rusengo.

– I hadn’t seen anything like it anywhere on that scale, Happonen recalls.

I also remember how the children’s clothes were covered in red dust. Wearing their only set of clothes, often ragged, the children curled up in hunger to sleep in huts resembling a pile of twigs.

The starting point for the work was not easy. 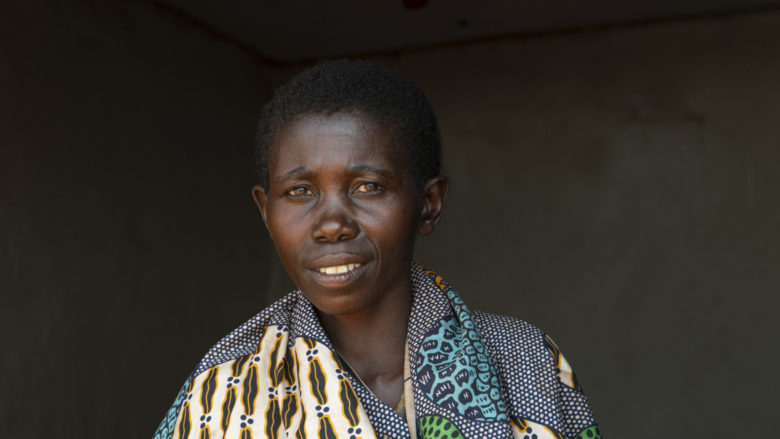 Antoinette opened up about her family’s challenges. Antoinette was happy to hear how her interview had been part of bringing help to the whole village.

Happonen returned to the village for a filming trip for the Food for Life campaign less than a year later in September 2019. A two-person film crew arrived at the village of Rusengo in the morning. There would be a lot to photograph during the day.

We were faced with the same grass huts that Happonen had seen the previous time. Small gardens had appeared among the banana trees. As part of Fida’s development cooperation, the home gardens could already yield something to eat. The families also had pigs in small enclosures next to their huts. If a pig had piglets, families would earn extra income from selling them. A school had been built beside the village. Glimpses of hope were visible.

However, from interviewing the villagers it was clear that many things still made life unreasonably difficult. Antoinette related the challenges her family faced. Their dad was paid less than 50 cents for a day of manual work. It could get some cassava flour and dried small fish. The family ate this nutritionally poor food on the days when he happened to get a job. If there was no work, neither was there any food. It was difficult to concentrate at school on an empty stomach for the kids. Water had to be fetched from several kilometers away also. Carrying water was an energy-intensive job. How can you fetch water when you’re constantly weak from lack of nutrition?

– We live one day at a time, Antoinette noted in the interview.

Antoinette’s family of seven lived in a simple hut of a few square meters made of twigs and branches. On the floor there were three stones that formed the cooking place. There was no chimney. And no need for one, as light shone through the sparse walls of the hut. When Happonen went inside, his hat touched the low ceiling, sprinkling soot on his neck.

There was some progress in the village, but the situation was still difficult. But it was going in the right direction. A few kids were already smiling in a couple of pictures.

Towards the end of the year 2019, news from China about a virus that made people sick in Wuhan was heard. After a few months, the whole world was plunged into chaos. The stalled world situation also put Happonen’s field trips to Burundi on ice. Around the same time, Fida began raising funds in Finland for Burundi as part of the Food for Life campaign. The campaign generated more than €200,000.

Big change in a small village

Happonen was finally able to return to Burundi after a couple of years. In the fall of 2021, he stood on the Rusengo village road once again. This time in utter amazement.

– I immediately realised that the situation was not the same as last time, Happonen says. The village could no longer be recognized as the same place. Houses built of clay bricks now stood in the shade of the banana trees. Fida has been involved in supporting CEPBU’s housing project.

– Almost all the huts where we took photos before were gone and there was a house instead.

Seeing such a radical change came as a complete shock to Happonen. The houses were not the only change that occurred in a couple of years. A water tap had been made for the adjacent school. It had been built in collaboration between the CEPBU and the Catholic Church. Now no more time was spent fetching for water. The school also had ramps for toilets that were accessible by wheelchairs.

There was a microloan group in the village where people could lend each other money. Similar groups have been established by Fida all over East Africa. With these, otherwise impossible acquisitions can become a reality.

The small gardens Happonen had seen the previous time had grown. The villagers had larger plantations and their products already provided a small income for the family.

The toilets at Rusengo School now have ramps for access by wheelchair.

Antoinette was delighted to hear how her interview had been part of bringing help to the whole village.

However, the biggest change had occurred in the villagers. Enthusiasm shone from their faces. Suzanne, an active member of the Rusengo village committee, stood happily in the doorway of her new house. Suzanne clapped her hands with a smile when Happonen asked what it was like to live in a new house.

– My children can now go to school, Suzanne announced.

– Go to school? How does it relate to the house? Happonen wondered.

– Before, when we lived in a grass hut, water came through the roof and wet the children’s homework. When the children took them to school, the teacher sent the children home. Now their homework stays dry. I’m so happy, Suzanne said.

Happonen also met Antoinette. The family’s old hut was gone, and they now lived in a brick house. Antoinette was delighted to hear how her interview had been part of bringing help to the whole village.

Rusengo was a changed place. Life would at least be a little easier in the future.

The focus of Fida’s work in Burundi is slowly shifting to other villages. In Rusengo, the children continue in school with the support from sponsors. A business training course was recently held in Burundi, and young people who completed it become trainers. When Rusengo’s turn comes, parents like Antoinette and Suzanne can get their families new livelihoods with ideas from the entrepreneurship training.

The village under the shade of banana trees is waiting to see what will happen next.