An oasis in the middle of the desert 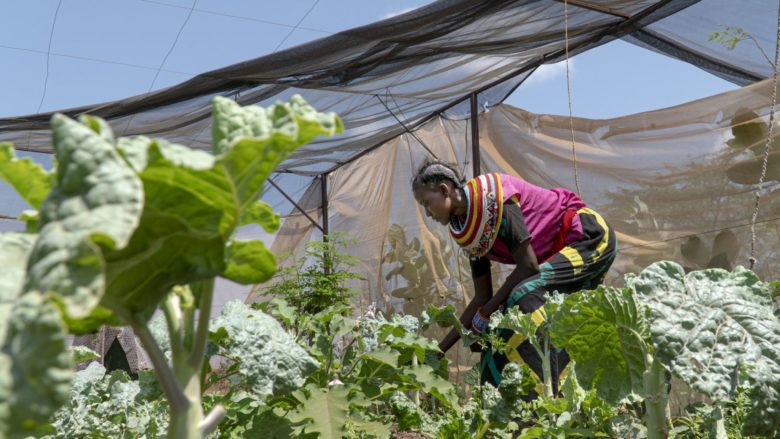 In the middle of the Kenyan wilderness, an oasis has been created. Research results show that clean water and farming practices developed for harsh conditions have resulted in significant change there. Unlike previous generations, children no longer suffer from hunger.

Marsabit Province is in Kenya, near the Ethiopian border. The extinct volcanoes nearby have dispersed sharp lava rocks in the area. Whirlwinds lift dust and sand high off the ground. The sun’s rays burn through your skin, and you can feel the dryness. There has been hardly any rain in the area since December 2020. The harsh landscape causes problems for both humans and animals.

The drought has resulted in malnutrition, which has been a serious problem in Loglogo, Marsabit for long. In children, malnutrition can cause stunted growth. In Kenya, more than a quarter of children under five are small for their age.

Whirlwinds lift dust and sand high off the ground. The sun’s rays burn through your skin, and you can feel the dryness.

In Marsabit, we meet Elias Kithinji, who came to the village to work with the Full Gospel Church of Kenya (FGCK). Elias moved from a cool climate area to where the temperature is regularly over 30 degrees Celsius. Elias decided that the future of Loglogo’s children would be different. There is now a green oasis in this barren wilderness, that differs from its surroundings. Stones, dust, and thorny plants surround the area. The area is fenced off and surrounded by trees. The trees differ from other vegetation. It all started from a borehole. A large steel water tank rises above the area. There is a school and screened greenhouses nearby.

Warning signs about crosswinds line the roads in Marsabit Province. The hot gusting wind is relentless. There’s nothing in the terrain for protection. The remains of broken greenhouses can be seen everywhere. They were built normally, but the gusts of wind have torn away the plastic over time. All that’s left are twisted metal frames.

However, the present protective screens make it possible to grow vegetables and fruits. A new design for the structures was introduced to tackle the wind problem. The screen covered greenhouses are made with low metal structures about two metres high with fabric roofs and walls. The fabric is porous enough to let the wind through, while preventing insects and other animals from getting in. It protects the plants from heat and keeps the precious moisture inside. The harvest is flourishing. Elias shows us cabbages, tomatoes, eggplants, and other vegetables.

Food for the Rendille tribe consisted mainly of milk, meat and cornmeal. Ugali, which is made from cornmeal, is a common food in East Africa. Due to the strong winds, corn cannot be cultivated in Loglogo, because the strong winds knock over and uproot the stalks. So, the locals have had to buy corn.

In Loglogo, people were not used to eating vegetables, but greenhouses covered with protective screens made cultivation possible. Elias trained the residents in cultivation and the preparation of vegetables. At first, the taste seemed strange to them. Over time, however, vegetables became part of their nutrition. The villagers’ diet became more varied. The cultivated harvest itself began to be sufficient for their own nutrition, and some was left over to sell.

Moringa, the tree of life

There are 200 moringa trees growing in the yard. The trees have been pruned recently, making harvesting easier. There are fresh buds on the branches. The wood is soft and easy to cut. Moringa trees are often called horseradish trees because their leaves taste like horseradish when eaten raw.

Moringa is also called a superfood. Its natural habitat is in the Himalayan mountains of northwestern India. The tree grows in very dry and low rainfall areas and is not choosy about the soil. It grows year-round and is the most nutritious plant in the world.

The leaves can be eaten as such, dried, or ground up as a flour. Moringa is called the tree of life because it contains 25 times more iron than spinach, ten times more vitamin A than carrots, seven times more vitamin C than oranges, twice as much protein as yogurt, four times more fiber than oats, 17 times more calcium than milk, and 15 times more potassium than bananas. What other plant is as nutrient-rich?

Getting water from their own well significantly improved the living conditions in Loglogo, and the training in cultivation changed people’s lives. The Kenyan Government recently commissioned a study on the problem of malnutrition in Marsabit province. To their surprise, there was no malnutrition in Loglogo. Water and net-protected greenhouses made cultivation possible. Foods diversified. Vegetables and “the tree of life” brought food security and well-being into middle of the desert.

World Health Day is annually celebrated on April 7th. During the day, health topics that affect people all over the world are highlighted. Access to food and clean water have a major impact on the health and livelihoods of families. More than 600 million people do not have access to clean drinking water, and one in five children in the world suffers from malnutrition. Fida works for food security and gives training on sustainable farming methods in eastern Africa. Through Fida’s work, the ability of thousands of people to cultivate land and make a living improved in 2021. In Kenya, thanks to Fida’s work, more than 1,620 farmers were able to grow vegetables and keep animals.

A third of Kenyans live in poverty. Challenges are due to meagre opportunities for education, gender-based violence, poor levels of sanitation and hygiene, and the absence of food security. With Fida’s help, communities are trained, and people told about livelihoods that promote access to food and clean water.