Sabir built his house with only one leg 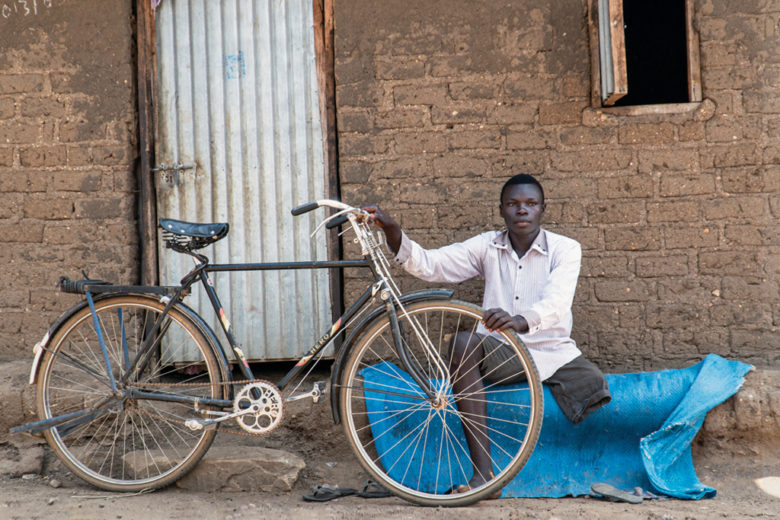 Sabir means patience. It has been demanded of a man who has had to cope with the murder of his father, exile, and loss of a leg. The difficulties have not discouraged Sabir but fueled his ingenuity.

In 2016, when Sabir was 16 years old, his home village in South Sudan was attacked. His father died in the attack. Sabir fled for his life with his mother and four siblings. As he ran, Sabir stumbled, and a huge mountain rock came loose and crushed his leg. He managed to limp across the border into Uganda and got to a hospital. However, nothing could be done to save his foot – bacterial inflammation had caused necrosis and the leg had to be amputated.

Sabir did not give up

The South Sudan Civil War lasted more than 20 years. When it ended in 2005, the southern regions of the country voted for independence. The state of South Sudan was established in 2011. However, a couple of years later, the country was forced into another civil war. About 400,000 people died in the wars and more than four million became refugees. More than half of them fled to neighboring countries. About 880,000 refugees arrived in northern Uganda, across the border. The Bidibidi Refugee area, one of the largest refugee settlements in the world, was established in Yumbe. About 233,000 people have settled in the 250 square kilometer area. Most of them are women and children.

Sabir’s family also settled in Bidibidi. Sabir’s mother remarried, so the young man had to take care of his four younger siblings. The hard-working man with only one foot managed to build a house for himself and his siblings. He made the walls with mud and brick, and the roof of grass and straw.

Sabir has a small garden in the yard of his house where he grows maize and tomatoes. The World Food Program (WFP) had to reduce food rations for those living in the Bidibidi region due to insufficient funding – with the corona pandemic, the need for beneficiaries increased and food prices rose. Sabir is now trying to make extra money by hoeing other people’s gardens.

Sabir is now studying at Napati High School. The Ugandan government began publishing study materials on the Internet last spring so that children could study even when schools are closed. However, none of the students living in Bidibidi have radio, television, or internet access, and only a few have schoolbooks. The only materials available to them, in addition to their own school notes, have been study materials distributed by Fida volunteers in cooperation with Finnish Church Aid in Bidibidi to about 1,600 schoolchildren.

Sabir is happy, that he just learned to ride a bicycle on one leg.

During the corona pandemic, Sabir also has been able to study by reading the notes he made earlier at school and the materials provided by Fida. The young man is involved in Fida’s sponsorship program. He dreams of an artificial leg and his own bicycle – he says happily that he has just learned to ride a bicycle with one foot.

Launched in March, the Food for Life campaign enriches lives of the Bidibidi refugee children through play, education, and learning. Children are also offered professional help to deal with traumatic experiences.